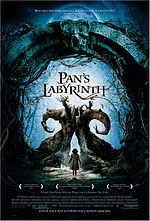 Tuesday is my dear wife's birthday, so we did the dinner and a movie thing tonight in anticipatory celebration. We had three possibilities in mind, but were just a few minutes late for Letters from Iwo Jima, and she said she wasn't in the mood for The Last King of Scotland, so we bought tickets for Pan's Labyrinth (El Laberinto del Fauno). We had seen a brief online review, so we knew it was on the "dark" side, which never really excites me about a movie going in, though I'm often glad coming out for having seen it. This is one of those times.

I'm not a movie critic, so I'm not going to presume to do an actual review. (Though, I will say, please do heed the 'R' rating and do not take pre-teen kids to this movie. It is billed as an "adult fairy tale," and it is just that, i.e. for adults. There is plenty of raw material for a long season of nightmares here, as one young family learned in the screening we attended--they had to leave about a third of the way through the film with a sobbing and frightened child.) Since there's no way I can ever effectively ditch the pastor's hat anyway, I'm going to go with the flow and offer a couple of observations about how Guillermo del Toro's work that has garnered Oscar nominations in six categories intersects with Christian faith and spirituality.

This is not, by any stretch, a "Christian movie." (There is a priest in the cast, but his role is peripheral, and not integral to the plot.) In other words, it's not a Matrix or Narnia-type story, with which you have to be pretty dense to see not only Christian themes but an explicit allegory with the very Paschal Mystery. It's within shouting distance, however, of a Tolkein-like Ring story, though without the epic dimension. Gospel themes can be clearly discerned by those who have eyes to see and ears to hear, but it's like the Gospel according to Picasso, with recognizable bits here and there and ordered into a narrative that cannot be even generally squared with the "old, old story," but which has significant areas of overlap.

Themes of good and evil, darkness and light, are present in stark relief. We see this in both the real world of conflict between government forces and an anti-Frano insurgency in post-Civil War Spain (1944), and in the sort of parallel universe that is only visible to the principal character, a pre-adolescent girl named Ofelia, a universe of fauns and fairies and subterranean kingdoms.

Ofelia's task is not only to escape from the hellish existence into which her widowed mother has unwittingly brought her, under the sway of a tyrannical step-father who is the very personification of evil, but to "return" to a fantasy-like world in which she is a princess, and which is groaning with eager expectation of her coming. Yeah, in this story, the messiah is an eleven-year old girl.

But at a critical point in the story, Ofelia turns into an Eve-figure. She literally eats forbidden fruit, and wreaks all kinds of havoc as a result. By the end, however, she's back in her messianic role, including the shedding of the blood of an innocent victim in order to open a portal between two worlds that had been estranged from each other.

Like I said, you can only press these connections so far, and then they break down. And I don't much care whether Senor Del Toro had them explicitly in mind when he wrote his original screenplay or not. In fact, I'd almost prefer to find out that he didn't, because it would be yet another illustration of how the key elements of the Gospel story are embedded even in the unconscious human imagination.

One final tidbit is worth pointing out. In the final scene, after having been shot by her trigger-happy stepfather, we see Ofelia finally being welcomed into the magic kingdom that has been awaiting her return. Yet, we also see her lifeless body being wept over by the symbolic "forces of light"--the republican guerrilla resistance. Is this an illustration of the sometimes disjunct relationship between believing and seeing, between faith and empirical experience? Does it mean that Ofelia imagined the whole thing after all (as her mother kept trying to tell her)? Or that her "body" died while her "soul went to heaven"? None of the above? Should I quit trying to figure it out and go to bed?

Good movie, but scary. It was pretty pathetic for a couple of fifty-somethings to be hiding their faces in each other's shoulders on several occasions. We just can't take each other anywhere anymore.
Posted by Daniel Martins at 1:17 AM

Thanks for the review Dan. I've been debating whether or not to take some time off from on packing and go see this one. (The promo's look interesting - and the title suggests a "mythic" theme.)

I think I'll try to find the time.