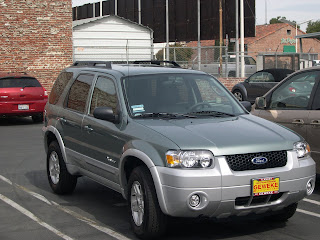 My three fabulous grown children, whose political views, unlike my own, list considerably to port, would attest that calling me an "environmentalist" is a bit of a stretch. I'm not as wacko as some of the voices on late night AM talk radio, but I have been known to voice a reservation or two about the scientific objectivity of some of the global warming alarmists. And although I can be bought, it would take a substantial sum to get me to sit through Al Gore's movie.

Nonetheless, I am now the proud owner (in partnership with Ford Motor Company Credit), of a 2007 Escape Hybrid. It all happened rather quickly; I'm not even sure what got into me. Oh...now I remember...it was the price of unleaded gasoline in California heading north of the $3.00 threshold and threatening to homestead in that territory. That and the big tax rebate the feds offer to hybrid buyers. Like I said, I can be bought. Call it market-based environmentalism. Plus, I think I get to drive in the carpool lanes when I go to the Bay Area, even if I'm by myself. Pretty cool.

OK, I have to admit, I did get the one with GPS. It's not that I'm particularly prone to getting lost; quite the opposite. It's just that, at age 55, I really don't have any "toys" to speak of, and this is a fairly modest one, as toys go. Men don't mind asking directions if they get to ask a computer that's talking to a satellite.
Posted by Daniel Martins at 10:50 PM

And honestly, as someone whose political and theological inclinations appear to be very close to yours, I have to recommend Al Gore's film. I am no fan of my fellow Tennessean, and he is not the most dynamic speaker, but the movie is very worthwhile.

Congrats Father Dan! I seem to have come to the same conclusion, namely that being a Repulo-Catholic is not always a very "congruent" enterprise. That great philosopher, Rush Limbaugh (jk), is not necessarily the best spokesperson for a Christian Politics, and how she ought to order her thoughts on the political universe. The most notable example is of course is the Green Patriarch, his All Holiness Bartholemew of Constantinople, who tirelessly lobbies for adoption of the Kyoto Protocol, etc. Being a good steward of creation does not mean, as my Libertarian friends suppose, to reflect all token environmental issues through the prism of laissez-faire Capitalism, and thereby allow economics to order the moral issue of stewardship. If I didn't dislike Rod Dreher so much, I would probably call myself a Crunchy-Con!