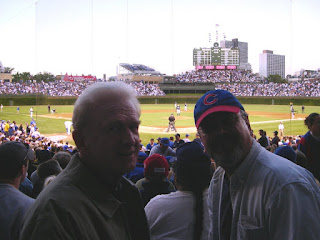 I'm not ashamed to admit it--one the things that has excited me about moving back to the midwest is the proximity of Chicago in general and Wrigley Field in particular. I know my experience is in no way unique, but my connection to the place is veritably spiritual--perhaps because it captured my imagination when I was a child, and I have returned there steadily, though at odd intervals, through all the phases of my life to date. It symbolizes continuity and steadiness in a larger environment of flux.

So I jumped at the chance to attend last night's game when my former (Stockton) parishioner J.J. told me he would be flying in for the series; his son happens to be employed by the Milwaukee Brewers as an outfielder and left-handed power hitter. What a great night--it was fun to reconnect with J., to drink in the atmosphere, and to witness a fine game with a nail-biting ninth inning, with playoff implications abounding. (Sorry about the backlit photo--my Plutotian spouse is keeper of the digital camera and she wasn't there [Wrigley Field would be so wasted on her] to show me how to make the flash work.)

It meant, of course, that I had to sit in a section of Brewers fans, including many wives and girlfriends of players! That was bizarre. I've watched the Cubs play in other venues (Los Angeles, San Francisco, Atlanta) and always encountered a healthy number of Cubs fans. But I've never been surrounded by the opposition at Wrigley. I tried to behave circumspectly, particularly since the Cubs manage to avoid once again snatching defeat from 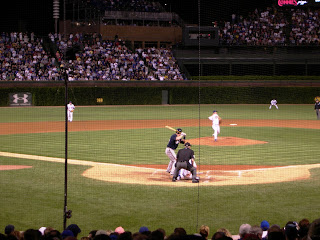 the jaws of victory. (Ryan Dempster does get the job done, but he makes it a little to "interesting" en route.)

As you can see from the picture below, we had pretty good seats--about twenty rows up from home plate. This allowed an amazing view of Cubs reliever Carlos Marmol's curve balls, which are, from a hitter's perspective, beyond nasty. (Not Marmol in the picture--that's starter Ted Lilly.)

Living in Warsaw, yes, Chicago is accessible, but moreso for day trips than evening events. The time zone change really bites us when we leave the city late at night. I got home at 2:30 AM. But I'd do it again in a heartbeat.
Posted by Daniel Martins at 12:56 PM

B and I were thinking about you as we were "watching" the score on the computer! When Milwaukee scored a run in the top of the 9th our hearts began to sink and B, in his usual fashion said..."turn it off...only something bad can happen now!" I sometimes wonder just what kind of Cubs fan he really is! However, since we knew you were at the game we were doubly delighted that we could all say "CUBS WIN!" (Sorry, J, can't win them all!)

now your re-entry into the midwest has been officially blessed, it seems.
-Jordan

i am seriously jealous. i share your excitement about your relatively close proximity to wrigley, and i will definitely be visiting during next year's season.

OK, I can't resist... From the "Overheard Lines" (overheardlines.blogspot.com) archives:

"Can you believe that dork brought a laptop to a ball game? I definitely have to blog about that."

Way to go, Cubbies!!!!!! My mother would be so pleased. So glad you got to be there once again to connect with your history and on a victorious night, too!

How sweet it is! Barb :D

I have issues about losing a friend to the midwest. However I am truly happy that you are close to your beloved Cub. My heart sings with joy for you. This may just begin to soften your move. Take care.