Snowed In On Sunday 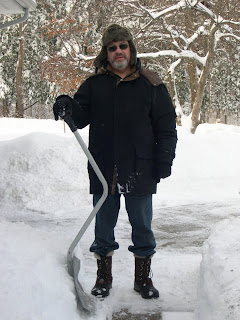 A priest is supposed to spend Sunday morning presiding at the Lord's Table and proclaiming the Word of God. You can see here how I spent mine today. The Dragonfly and I got back from a trip to Chicagoland about 9 PM last night, having driven the last 60 miles or so of the trip in moderate snowfall at about 45 mph. Predictions were for a couple or three inches of accumulation by morning. That much is possible to drive through, so I made plans to follow my usual Sunday morning routine and then blow off the driveway in the leisure of the afternoon.

Nonetheless, when I rolled out of bed at 6 AM, I immediately took a look out the front door and saw what looked like more than a foot of snow on the ground. So I slipped on some jeans and my new boots and fired up a snow blower for the first time in my life. It was actually kind of fun, and I put the driveway into usable condition in about 30 minutes.

I came inside, showered, dressed, and prepared to leave for church. But then I noticed that it was snowing again, obscuring the fruit of my earlier labor. I got a phone call from our Facilities Manager with the news that several Warsaw churches had posted cancellation notices on TV and radio stations. "Cancel church?!" I exclaimed. I had never heard of such a thing. "We don't do that." A minute later I noticed a car at the end of the block, right where I would need to be turning. It was stuck. The driver got in and out several times, fooling with the snow in order to clear a path. He was not enjoying any success.

Now, I can be very persistent. Dragonfly, who had by this time called the police department for a road condition update, inquired as to how how I intended to travel the two miles between the Rectory and St Anne's Church. "With my head planted firmly in the sand," I replied. (That's kind of an inside joke, but if you know me you can figure it out.) The sight of a stuck car half a block from my house was a stiff dose of realism, and I resigned myself to the reality that the early Mass would not happen, while remaining optimistic about the principal celebration at 10:15.

But it continued to snow. Harder and harder. Soon there was another eight inches on top of the driveway that I had just blown off, and close to two feet on the street. "Welcome to the upper midwest," I muttered to myself, thinking of other places I have lived, where such as thing as the weather preventing anybody from getting to church would be unthinkable. Sure, I've seen wind and rain cut Sunday attendance, but never eliminate it. Dragonfly asked if I wanted to yet alert the media that the 10:15 liturgy at St Anne's Church would be canceled for the day. "No," I replied. "We may not be able to get there, but we'll never cancel it."

She laughed at the apparent incongruity of my statement, as if to say, "What's the difference?" But there is a difference, a very important one. Martin Thornton writes in Christian Proficiency about the "art" of missing Mass on Sunday. Assisting (or presiding, in the case of a priest) at the Eucharist on the Lord's Day is a fundamental Christian obligation (and, I might add, usually a fundamental Christian joy). But sometimes it's an element of rule that is either trumped by a greater obligation (staying home to care for a sick child, for example) or is simply impossible to keep. It was indeed impossible for me or anyone else who doesn't live within walking distance to make it to St Anne's this morning for Mass. 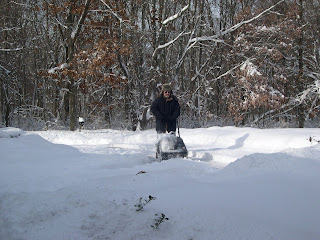 But my sorrow is not that I worked on a sermon, the notes for which still sit on the pulpit/lectern, ready to assist in the preaching of the word for the Third Sunday of Advent. It is not because I and the whole parish have missed Sunday, but because we have missed a particular Sunday. This realization, per Thornton, is part of the "art" of missing Mass. The Third Sunday of Advent 2007 is a unique and unrepeatable event, and I am sad for having missed it. It plays a unique role (as every Sunday plays a unique role) in the rhythm of the liturgical year--in this case, in our communal preparation for the celebration of Christmas. In the economy of Divine Grace, I am certain the Holy Spirit will redeem this loss. But, for now, I feel it. I will not get to sing some of my favorite Advent hymns ("On Jordan's Banks," "Watchman, Tell Us of the Night," "Hark! the Glad Sound," "Prepare the Way, O Zion") this cycle; they'll have to be put back on the shelf until next year.

So, insofar as I can remember, for what is only the fifth time in the last 35 years, I have missed Mass on Sunday. I'm not happy about it. But I hope I've done it "well," in that I mourn not for an abstraction, but for the stillbirth of a unique event.
Posted by Daniel Martins at 1:19 PM

What we lack in Diocesan drama, we make up for in snow. Welcome to Northern Indiana!

Gosh, Father Dan, don't you remember "snow days" in Chicago when all the schools were closed? I must admit that I kind of loved those particular days...altho I would rather miss school than church. It was bright and sunny albeit slightly cold here in Stockton...and we had a lovely Advent service...on my one year anniversary as a Deacon!

Are you planning to miss Advent 3 NEXT YEAR as well? Check the date under your picture. I would say "chill" but it looks like you already are. Enjoy a white advent. j

Big Guy, you look like a real native! Count on Dom to help you out if this happens again over Christmas.

Welcome to snowland (says she from Vermont). It's a bit of a change, no? We had eight inches on Sunday morning but fortunately, I can always count on someone showing up and the rectory is just a fifteen minute snow-shovel up the ramp from the church doors. So there were three of us at the 8.00 and 12 of us at the 10.00. I can understand the disappointment, however, in missing mass on Advent III. This Sunday the weather doesn't bode much better. Lee