Saturday, January 24, on the Dead Sea. We have the morning off! Load-em-up-and-move-em-out time isn't until noon. The idea, no doubt, is that we have an opportunity to take advantage of some the amenities of the place, which include floating in the Dead Sea itself--which can apparently be accomplished in nearly any body position because of the high salt content--covering oneself with the local mud (supposed to be therapeutic), or patronizing the full-service spa located in the hotel (with more varieties of massage than there are items at some sushi restaurants). Alas, a bathing suit is the one item I neglected to pack and all the massage openings are booked. So I'm left with a very familiar passtime--walking. I go out to the beach, stand on an artificial peninsula, and just soak in the moment. This is the lowest spot on earth, some 1500 feet below sea level. The rumor is you can't even get a sunburn at that (lack of) altitude, and that it's good treatment for a whole range of ailments, including depression. I get a chuckle out of a sign leading into the beach area: "Nightly bathing is forbidden." So every other night would be OK? I can infer the actual intent, of course, but the non-idiomatic English reminds me of something I first learned traveling in Brazil, which is that, no matter how well you think you know a language not your own, run it by a native speaker before you put it on a sign or a website or in a magazine. Nobody is exempt from this rule. 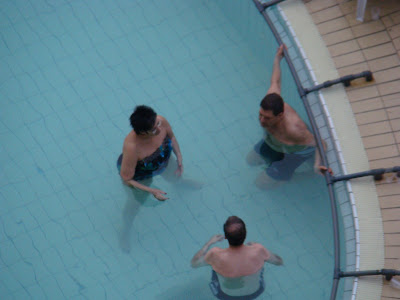 At noon our bus began to transport us northward along the western shore of the Dead Sea. It's gradually receding because the inflow of fresh water is diminishing due to getting used by the 7 million people who live in Israel. We can see evidence of this slow environmental train wreck in the form of sink holes between the road and the shoreline.
Our interim destination is Masada. To anyone who knows the story, the very word is evocative of strong emotions associated with the strong actions that human beings are capable of taking under extreme circumstances. The place was built, on a virtually impregnable mountaintop, by Herod the Great just in case he needed to get out of Dodge for a few months, so access these days is via a cable car ride that last about three minutes (a bit of a challenge for me; I don't "do" heights). It turned out Herod never used it, but it was certainly ready for him, complete with immense storerooms, an intricate system for trapping rare and precious rain water, and an amazing room that wasn't called a sauna, since Herod wasn't Swedish, but which, for any practical purpose, functioned like one. Once again, I'm in awe of the engineering prowess of our ancient forebears. 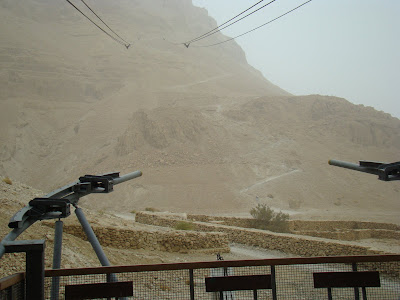 The most sobering archeological find in Masada, of which we are shown a picture, was the ten pottery shards on which were written the names of the last ten men in the community. After it became clear that the Roman seige would imminently succeed (after the patient construction of an immense earthen ramp), each man slew his wife and children. Then these ten killed all the other men. The pottery shards represented a lottery: The man whose name came up killed the other nine, and then took his own life. Masada is a keystone of the "never again" narrative that binds Israeli Jews together, despite their immense differences. As Yossi explains it: "Never again will we die like sheep [referring to the holocaust] and never again will we take our own lives." Any analysis of the recent mess in Gaza that fails to take account of Masada just doesn't "get it." 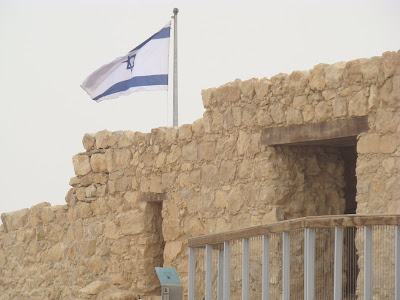 Not far up the road from Masada is Qumran. At the time of Jesus, there was what amounted to a Jewish monastic community--an ascetically strict and ideologically apocalytic community--that lived there, the Essenes. There is credible speculation the John the Baptist wa greatly formed and influenced by this community prior to his public ministry, and that this influence rubbed off on Jesus himself. Like the Christian monks of the European middle ages, one of the things they got good at was making backup copies of biblical texts, which they were wont to roll up and stick in clay jars, which they squirreled away in caves conveniently located on nearby hillsides. In 1947, a Bedouin mother got fed up with her boys and told them to get their hind ends out of the tent and go play. So they started throwing rocks at caves (rocks are as ubiquitous on the ground in Judea as they are in Galilee), and one of their rocks hit one of the clay pots and that's how we got the Dead Sea Scrolls--for biblical scholars, the Powerball lotto of acheological finds. 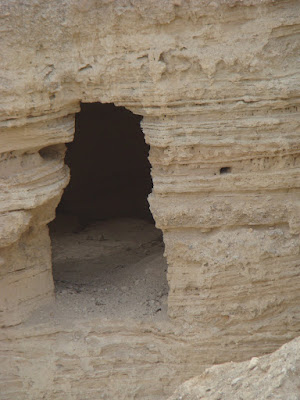 Now we learn why the scriptures always talk about "going up" to Jerusalem, no matter what the direction of travel. It's because, from anywhere in Judea, Samaria, or Galilee, going to Jerusalem involves traveling uphill. This is especially true when one's starting poing is the Dead Sea! As we wind our way upward on the highway, Yossi does his best to psych us up for the experience of seeing the Holy City for the first time. Rather that just taking us directly to our hotel, he had Meier drive us to the summit of Mt Scopus, from which we can look down on the old city (and a good bit of the newer city). We get out of the bus and take it all in (and bundle up a bit; it's at least 20 degrees cooler that what we've lately become accustomed to).
It's nearly sunset, and the Muslim call to prayer begins blaring from the minaret of a nearby mosque. This occasioned one of the few moments of awkwardness arising from the differences between the varieties of Christians that made up this group of 12 pilgrims. In response to the Muslim call to prayer (admittedly, IMHO, too loud and quite irritating), somebody alluded to Jesus' exhortation to not pray with "vain repetition as the Gentiles do." This made me bristle, not because I'm a particular friend of Islam--truth to tell, I think it's a quite dismal religion--but because a good deal of Christian prayer that means a great deal to me is also formulaic and repetitious, and I wondered whether the person who made the remark might similarly condemn forms of prayer that I find life-giving. On my own, however, I probably would have been inclined not to make a big deal of it. It was just an ignorant remark. But then one of our other travel companions muttered, "What an ignorant thing to say!" Whereupon I thought to myself, "Indeed. But some truths are better left unspoken." I can't recall the precise turn of events, but I soon found myself in ... shall we say, a "Socratic" exchange with the source of the "vain repetition" statement, during which he assured me that the Muslims down the hill would be more than happy to welcome me into their fellowship. I was also assured that while Muslim prayers may not be meaningless to Muslims, they certainly are to God.
Hmmm.

Here's my edudite analysis: The noise emanating from the minaret was like a red flag to a fighting bull. It set off an explosion that was already poised to happen. There is a certain brand of American evangelical Christian whose inner mental template of the Holy Land--and we had just arrived at the Big Top of the Holy Land--is that of a Christian theme park staffed by Jewish employees. In this idealization, there is no room for Islam or Muslims. They are interlopers, tresspassers. They spoil the view. So here we are, Christians looking down on the seat of Judaism, and what do we see? The Dome of the Rock, a Muslim shrine, right on the peak of the Temple Mount, right where the Holy of Holies should be, right where the veil was rent at the moment of Jesus' death. And what do we hear? Vain repetitions that we can't understand blaring from a cheap sound system. It's not a suprise we had a Socratic exchange between Christian brethren on Mount Scopus. It's a surprise nobody went truly postal.
After a drop or two of ceremonial wine, and a special blessing from our Jewish hosts, we head down into the city and our hotel (not far north of the old Damascus gate). Since it's the eve of the Lord's Day, and our itinerary for Sunday looks jam packed, my two Episcopalian colleagues and I score some challah bread and a small bottle of wine and, after dinner, repair to my room, joined by a United Methodist companion, and celebrate Mass for the Third Sunday after the Epiphany.
Posted by Daniel Martins at 8:32 PM

Dan+...these last four posts have been incredibly interesting! Now I am really sorry that we cancelled our tour to the Holy Land with the Diocese for this May. You have really given my heart an urging to find a way to reschedule for another tour! Thanks so much for sharing all of this in such an inspiring way.

+T knew every ice cream shop from Ceasarea to Aden and in the Old City -which was our last stop every night we stayed outside the walls. It was Ben & Jerry's at the Dead Sea.

The Sunday were in Jerusalem, our Anglican bus driver wanted us to attend the 9an Arabic service at St. George's Cathedral to impress his girlfriend.

Some chose to go to Christ Church in the Old City and others of us went to St. George's. Our travel agency owner was with us the whole time, and, as a trustee at St. George's College, knew everyone.

Five min before 9, 6 buses full of UMC tourists pulled up. The dean frantic and short staffed, came to our our now friend and asked for help.

By grace, I was chosen with another departed friend to con-celebrate with the Dean of St. George's Cathedral. The next time I attend a celebration in Jerusalem, it will be the Wedding Feast of the Lamb.

I've so enjoyed this entry. Mrs. Weiss took us to the Masada exhibit visiting Chicago long ago. Amazing!

Glad to know there will be at least one more "episode" since you're not home yet! Please tell us about Jerusalem!