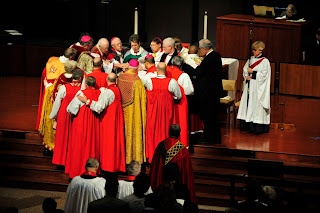 Here's the holy huddle from last Saturday. Take my word for it; I'm in there somewhere.

The day was utterly joyful and completely exhausting. It's been just a couple of weeks more than a year since I had the first serious conversation with someone about the possibility of being nominated to become the 11th Bishop of Springfield. The disposition of my heart at the time was that, yes, this may indeed be a vocation, that I had the raw charism that, perfected by the Holy Spirit through the sacrament of ordination, might make me a round peg in a round hole. But the odds were long, and I've had plenty of unvalidated spiritual premonitions in my time. So I'm still completely in awe at what has transpired. When I looked at myself in the mirror yesterday morning, my first thought was, "Who's that guy in a purple shirt who looks so much like me?"

That purple shirt--along with the other associated "bling" (as my 30-something children are wont to call it)--may be a small thing, inconsequential in itself, but as I've pondered it all during fleeting moments of solitude over the past couple of days, it has been the conduit toward a deeper understanding of the calling into which I have been (and continue to be) incorporated. It's a symbol, and among Anglicans, it evokes an immediate--almost visceral--response. It "means more than it says."

And it reminds me that being a bishop in the Catholic tradition, simply making myself available to be a symbol is a hugely important part of the job. Sure, there are thorny pastoral and administrative issues to tackle, and I've already got such things on my radar screen. But when I walked into St Paul's Cathedral yesterday morning wearing a mitre and carrying a crozier, I was aware--almost crushingly aware--of the weight of responsibility for me to simply be The Bishop, as distinguished from doing bishop-like things.

After the consecration liturgy on Saturday, I tried to go to the reception, but hardly got more than ten feet into the hall. I was beset with, of all things, requests for my autograph on the program booklet. I complied cheerfully, and posed for a lot of pictures in the process. But I was fully aware, even in the midst of such joyful activity, that people didn't really want an autograph from Dan Martins. They wanted an autograph from Daniel, Bishop of Springfield. That may seem like a fine distinction, but it is, I believe, a significant one (literally ...  significant).

Today, I've tried to figure out whether I want to wear my ring even when I'm not "in harness" (Monday is my day off). Again, that may seem like an utterly trivial decision, and on one level it undoubtedly is. My first thought is, No. The ring is heavy, and I'm almost constantly aware of it being there when I'm wearing it. It feels like an interloper; I haven't worn anything on that finger since I had a class ring in high school. But perhaps the weight of that ring is precisely what I need to be aware of right now. This vocation indeed weighs something. I am suddenly acutely aware that I am less "my own" than I have ever been. This was true, of course, as a priest. But that truth is now magnified several times over. I have no doubt that there will be heartache in what lies ahead. I also have no doubt that grace will abound. No doubt whatever.
Posted by Daniel Martins at 10:51 PM

God bless you and your ministry as a Bishop of Christ's one holy and catholic church. I have followed your comments in this space and in other forums within our Church for the past several years and I was heartened at your election as the Bishop of Springfield. Please Bishop Dan, do what you can to remind our Church that ashes are not for Ash Wednesday alone. As God spoke through Jeremiah in today's OT lesson, let us not hew out broken cisterns that cannot hold the water of life. God bless you, Bishop.

Bruce Robison said...
This comment has been removed by the author.
8:06 AM

Delighted to see you back in the blogosphere. As you slip on rochet and chimere for your parochial visitation I would simply myself remember, and with thanksgiving for your ministry, Benedict's word about the Cellarer in RB 31: "one who is wise, of mature character, sober, not a great eater, not haughty, not excitable, not offensive, not slow, not wasteful, but a God-fearing man who may be like a father to the whole community." Or about the Abbot himself, in RB 2: "when anyone receives the name of Abbot, he ought to govern his disciples with a twofold teaching. That is to say, he should show them all that is good and holy by his deeds even more than by his words . . . ." So, aim to be loved rather than feared, and remember what Mary Poppins said about a "spoonful of sugar," and I know you're going to be a great Bishop in our Lord's Church. You already are, actually.

Good luck with your new ministry.

As a habited religious I can at least begin to appreciate the difficulties presented by having outward and visible signs of one's vocation, though I am fortunate to share the burden with my brothers and sisters in the Order.

Don't let the bling, the autographs and the "Your Grace" appellations get between you and the Lord. Be a faithful teacher of the Word.

Praying for the Church.

Don't wear anything that might wind you up on the "Bad Vestments" web pages!

Dan--Thank you for some very honest and interesting reflections of a 'baby bishop'. I now can understand why Bishops wear that heavy ring.

Thank you also for your time and counsel and encouragement toward our mutual friend. Bill

Yes, the ring is heavy. I hope you can remain as candid as before. This is especially true of your understanding of the BCP.

There are few that can really come-along-side you in this identity. A few of them are in the house of Bishops now. A few used to be. As you go through 'baby bishop school' and meet some of your fellow purple pointy hats you will have to depend on discernment even more now that you have moved down the hall from deputy to bishop. As you are now one of "our" that is the whole church bishops we will hold you in prayer.