Eve of All Hallows 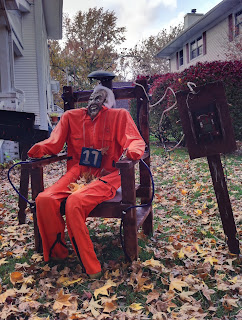 There's a house a few blocks from where I live, on one of my regular walking routes, where Hallowe'en is the highlight of the owner's year. He puts up his decorations gradually, beginning about two months in advance, in the high heat of summer, with a digital sign that changes daily indicating the number of days left until October 31. The item in the picture here is, in my perverted opinion, his masterpiece, though some might argue for the pirate ship (see way below). I've actually met the guy (the owner of the house, that is, not the one in the picture), and he seems pretty normal, thirtysomething.

While he is certainly, by any definition, a little over the top and around the bend, the difference between him and rest of us is one of degree, not of kind. We find Hallowe'en strangely compelling, even as we disguise our feelings in playfulness, because we find the subject of death hugely compelling. It is the sum of all our fears. Whatever momentary worry we may experience during the course of a day, there is a direct chain between the feeling of that moment and our fear of death.

So how is it that we have come to mock that which we fear? It is, I suspect, a speciation of the same genre from which we get gallows humor. Some of our pre-Christian forebears in northern Europe apparently had an annual ritual in which they lampooned death and everything associated with it, including the spirits of the departed, evil and otherwise. In due course, the Church in the west, as a matter of mission strategy, exploited this observance and baptized it, linking it with the great festival of All Saints (or All Hallows; hence the eve thereof contracted to Hallowe'en).

In this context--the context of a festival in which we celebrate the exquisitely thin veil between the living in Christ and the dead in Christ--mocking death and the symbols of death begins to transcend gallows humor and make some actual sense. The defeat of Death by the resurrection of Jesus is the linchpin of all that it means to be a Christian. It is that alone which allows us to negotiate the territory of our primal fears with some degree of grace, and even joy. It is the truth of Easter that makes Hallowe'en possible. If Christ is risen from the dead, then those who have died with him in baptism stand in a pretty good place from which to mock. 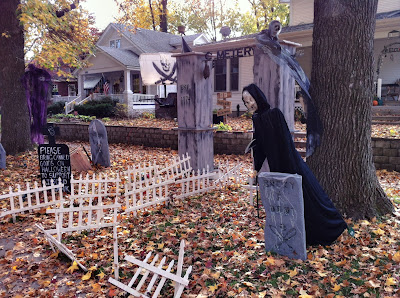 Never understood the appeal of Halloween. I did not like Halloween even as a child. Granted I realize that this "holiday" is a pagan holiday that we have usurped. Better to celebrate Reformation day and then All Saints and All Souls.

Hallowe'en is *part* of the celebration of All Saints.