A Bridge Not Far Enough 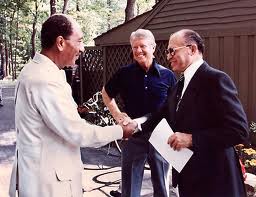 The Presiding Bishop has released a pastoral letter to the people of the Diocese of South Carolina. If one wishes to see an olive branch in her words, I believe there is one there to be seen. The first and last paragraphs tilt in a conciliatory direction ... or at least give it a glance. And Bishop Katharine's writing is usually nothing if not clear, which is a virtue in itself.

Inasmuch as its purpose may have been to reach out to the alienated majority of Episcopalians in the diocese, however, the letter falls sadly short. By invoking the standard narrative that "individuals can leave but dioceses cannot," the PB only raises the level of alienation.

We're about to go off a cliff. The loss of a diocese as large and vibrant (to say nothing of ancient) as South Carolina--and it is the loss of a diocese, however the institutional fragments are picked up post-apocalypse--is calamitous, and will have repercussions communion-wide and beyond. A friend of mine observed that this is how World War I got started--a series of automatic triggers getting pulled, with no one able to summon the imagination to Just Say No.

We need leaders--both the Presiding Bishop and Bishop Lawrence, along with those who advise and support them--who are willing to go off script (which will probably start with asking all lawyers to leave the room), to behave counterintuitively, to act outside of character. We need a Camp David moment, when Anwar Sadat and Menachem Begin were able to do just that (it should be added, at great personal cost). All the problems of the Middle East did not get solved there, as we know, but there have at least been 35 years of peace between Israel and Egypt. Bold and self-emptying generosity on the part of key players in our current mess will not solve all the problems of the Episcopal Church. But even if all we get is 35 years of peace between South Carolina (and those in others dioceses who stand with them theologically) and the majority of the Episcopal Church, it seems worth taking a few risks.

Let me be blunt: If we cannot get this right, we have no business being in ecumenical dialogue with anyone. And we might even question whether we have any business telling the world we have good news to proclaim. It is the gospel itself that is at stake here.

"If we cannot get this right, we have no business being in ecumenical dialogue with anyone."

Agreed, yet everyone with whom one speaks with in ecumenical dialog has separated from somebody once upon a time.

Dear Bishop, I'm posting here in its entirety what I posted on another blog:

This post completely ignores a critically important detail--one that seems common among such pleas that attempt to posit some sort of moral equivalence between TEC and the Diocese of South Carolina. That is that a disaffected minority group in the Diocese of South Carolina lodged charges against Bishop Lawrence with the sole intent to have him deposed and replaced by a revisionist bishop. The DBB violated the very spirit and intent of the canons for abandonment (Bishop Lawrence never once proclaimed that he had left the church--quite the contrary, he adamantly stated that he had not left, nor had any intentions to leave, TEC); yet, DBB certified abandonment charges.

The eventual domino effect would be that rectors of orthodox parishes would then be removed by the new rump bishop (who would not be subject to the normal election process in the diocese) unless they demonstrated a willingness to toe the party line. In short, practically every parish would have no determination whatsoever as to the episcopal or clerical authority to whom they would submit, but would be forced to accept whomever the PB forced down their throats. That is nothing short of tyranny.

The Diocese of South Carolina has been perfectly content (albeit uneasily) to remain as a voice of charitable dissent from the prevailing zeitgeist of TEC, but it's quite clear the Presiding Bishop and others within the church simply will not abide an orthodox voice--however much a minority. The Diocese of South Carolina (with support of her sister diocese in Upper South Carolina) made a good-faith effort to put forth a compromise that would allow the diocese to remain within TEC with her closely guarded principles and beliefs intact--which I shouldn't have to point out reflect 2,000-plus years of Christian doctrine, tradition, and reason which have been received from the Apostles and Church Fathers--but the Presiding Bishop, through deceit and subterfuge, completely undermined and derailed the attempt by Bishop Lawrence and Bishop Waldo (Diocese of Upper South Carolina). In short, she repaid good faith with bad. And it should be pointed out she did so while sitting across the negotiation table from Bishop Lawrence and Bishop Waldo.

The historical analogy that comes to mind is the Japanese ambassador offering assurances to the Roosevelt administration on the eve of Pearl Harbor, knowing full well of the unprovoked hell Hirohito was about to unleash on an unsuspecting fleet. Perhaps the ignominious violation of hospitality at Glencoe serves equally as well.

For anyone to suggest that somehow TEC and The Diocese of South Carolina are somehow equally to blame is complete and utter nonsense. The diocese attempted to extend an olive branch and the Presiding Bishop repaid the diocese with an adder. The Presiding Bishop's "pastoral letter" (which she sent practically on the eve of the diocese's special convention) is nothing short of a smile on a dog, and its condescension and presumption is, quite frankly, insulting to the faithful in the Diocese of South Carolina.

"For anyone to suggest that somehow TEC and The Diocese of South Carolina are somehow equally to blame is complete and utter nonsense."

When the stakes are as high as they are -- the legacy and future of Anglicanism in North America itself may be at risk in these proceedings -- are concepts like "amounts of blame" or abstract notions of "equivalence" really paramount?

It is not asserting a moral equivalence by simply observing the practical truth that both sides have the ability to step back from the brink even now.

And in any case, when the stakes are this high, not only for individual parishes or dioceses, but for the entire Communion, is that really the biggest question we want to debate right now: who is blaming whom and how much?

Is it not the better path to find charity where charity was not, to risk trust where trust was absent, to assume good faith where suspicion reigns? What kind of witness can we bear here? What will be the legacy of our actions, for us and our children? Are those not better questions?

"Let me be blunt: If we cannot get this right, we have no business being in ecumenical dialogue with anyone. And we might even question whether we have any business telling the world we have good news to proclaim. It is the gospel itself that is at stake here."

"If one wishes to see an olive branch in her words, I believe there is one there to be seen."

This letter convinces me that the PB has no intention whatsoever of seeking peace or reconciliation.

It is sad, even tragic, and yet I have become convinced that TEC's path is now firmly set in its own self-destruction, and that it must pursue that path to the bitter end before it will realize the hollowness and rot of its current agenda. This will be the eventual legacy of Katharine Jefferts Schori.

This is no cause for joy, happiness, spite or anything other than deep sorrow. I remain a part of TEC, and yet no longer feel a part of it. In fact, a large part of me feels repelled by TEC and what it stands for. I see this letter by the PB as yet another sordid, dirty, and duplicitous action which further grieves my heart at what this church has become.

It is my hope and prayer that when the current suicidal agenda at work in TEC has run its course - after all the pain, destruction, brokenness, hatred and ugliness has been fully visited upon the broken remnants of TEC - that, in the midst of the utter destruction, something can finally grow once more. I pray that TEC will not have been irrevocably destroyed before then.

I'll ignore the fact that you're cherry picking my comment.

If "the legacy and future of Anglicanism in North America" is dependent upon strict adherence and allegiance to TEC, then I would offer it's not merely at risk, it's doomed.

The long and short of it is that the PB has left our diocese in an untenable situation were we to stay in TEC. We will not stand by and watch the PB violate our sovereignty by deposing our bishop, dissolving our standing committee and replacing both with a heterodox bishop and standing committee while the only thing Mark Lawrence is guilty of is holding fast to the faith once received. --Bryan Hunter

I'm sorry but this letter from the PB is nothing but a stalling tactic. We have seen it time and time before- lure them into "dialogue" while what really is happening is that TEC is mounting their legal resources. Fool me once, shame on you. Fool me twice, shame on me. I think SC is not going to allow any fooling around.

No cherry-picking was intended, my apologies if I was not careful to understand your intent. But the phrase "moral equivalence" has been invoked more than once in this context and that idea seems to be driving emotions rather than shedding light.

From a charitable read of the PB's letter it seems TEC has not yet done the things you say -- depose bishops, replace SC's, etc.

Whether charity is a standpoint one must take, under duress and perceived attack and injustice is not for anyone to impose on anyone else. It's just a suggestion -- a plea for historical perspective on what one *truly can* endure when the implications of the proposed actions reach far, far into the future and affect so many not in the immediate vicinity.

It did seem to me that the Presiding Bishop's letter would have been much improved if she had made the points which she had mae to you subsequent to your earlier blogpost: that the claim that she had deposed the Bishop and the Standing Committee of the Diocese of South Carolina was simply not true. It would also have been improved had she made the point that the inhibition of the Bishop was not an option she had chosen to take, but rather the action she was canonically required to take given the report of the committee.

The Episcopal Church has been splitting since 1976...shattering, really. SC has merely recognized that she cannot, by herself, put all the pieces together again and that the leadership and most bishops are of a new and different faith.

Bishop Dan,
There are tipping points for everyone including the Diocese of SC. I believe your tipping point was "When they change the Prayerbook."