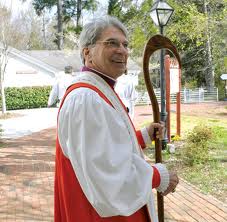 I think it wrong that the PB would insist on following the letter of the law during the consent process for Bishop Lawrence (consents had to be submitted in writing and not sent electronically), but now we see the requirement for a written renunciation is being brushed aside.

"Quite simply I have not renounced my orders as a deacon, priest or bishop any more than I have abandoned the Church of Jesus Christ—But as I am sure you are aware, the Diocese of South Carolina has canonically and legally disassociated from The Episcopal Church. We took this action long before today's attempt at renunciation of orders, therein making it superfluous."

Dear Bishop Martins:
You may be next, considering how your quasi-archbishop treats her underlings. I hope you have your retirement figured out!

What a sad display of Christian charity on our part. We have followed a Girardian path of picking a scapegoat and drumming up a false unity around attacking a minority. This has played out countless times in history. I falsely assumed we were bright enough not to be caught up in such a blood frenzy. As I learned in the conservative church: doctrinaire Puritanism can never tolerate dissent.

While many of us in the Continuing Diocese of Quincy wish no doubt a fond and hearty hello to our Illinois neighbor Bishop Martins, perhaps he might take a moment to consider that many of those of us who have remained loyal to the TEC in the disputed dioceses wish we had been afforded by the ACNAs the same modicum of the grace and understanding the bishop so eloquently demands from the TEC regarding the ACNAs. As many state supreme courts have affirmed and the US Supreme Court has refused to contradict, the Episcopal Church is a hierarchical organization which one is free to leave, but not one in which the tail is free to wag the dog. How about just giving the keys back and foregoing your ultimately futile legal manipulations? Go and build your own churches to be proud of. And as with the ACNAs in Quincy, Forth Worth and San Joaquin, I wish these South Carolina dissidents well -- though heartily disagreeing with them on fundamental issues of human dignity.
If Bishop Martins feels the need for a “fire extinguisher” to dampen the flames on the “top floor of a burning skyscraper” of his own, many of us would heartily recommend the cooling waters provided by our provisional bishop, John Buchanan. We miss him here when he is in South Carolina with his wife Peggy, daughters, and grand children, and hope that his presence can help facilitate the workings of the Holy Spirit within both the loyal Episcopalians who remain and those dissidents who leave. Peace be with you.