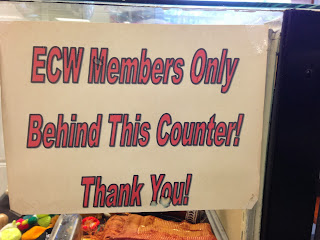 I snapped this photo this morning in the parish hall at the church of St Joseph of Arimathea in Hendersonville (TN), where it was my privilege to serve as guest preacher. (Here's the homily I shared with them.) It struck me as emblematic of a current fracas in the Episcopal Church that invites being dubbed UTOgate. (For a summary of the crisis that I think is pretty accurate, though arguably not unbiased, go here.) Parish clergy quickly learn--or not, to their peril--that there are two, usually inter-related, power structures that ought to be deeply respected: the Altar Guild and the Episcopal Church Women (ECW). Whatever the literal truth may be, the perceived reality is that the Presiding Bishop, her staff, and the Executive Council are attempting to sever the 130+ year bond between the Episcopal Church Women and the United Thank Offering. This is a pastoral mess of the first order. It threatens the viability of a ministry that has raised millions and millions of dollars over the decades for some very worthy endeavors. I understand the need for accountability, oversight, and transparency. No argument there. But it doesn't need to be ham-fisted. It's not too late to push the reset button on this, roll it back, and do it right. Why not let the UTO have separate 501c(3) status? What would be lost by doing that? And how would such a loss be worse than the sudden collapse of the UTO?

Many of my "progressive" colleagues in the House of Bishops seem to be all gaga over Pope Francis. Yes, he has a different personal style than his predecessors. I find him a remarkable man, and am both humbled and inspired by his ministry. He is frighteningly Christ-like. But I also happen to agree with most of his positions on controverted issues. And here's the deal: He isn't proposing any changes in either the theological or moral teaching of the Roman Catholic Church. None. If I were a supporter of same-sex marriage, or abortion rights, I could find nothing in the Pope's statements that would lead me to hope that a change in church teaching in these areas is imminent. So why the sudden triumph of style over substance? I not only agree with his views, I also agree with the need he has expressed to change rhetoric and reassess priorities. But many of the same voices that are raised in adulation of the Bishop of  Rome still see Episcopalians who share his views as outliers, and benignly and charitably (more or less) consign us to the margins of TEC. Just sayin'. Bit of a mystery here.

The only formal item on the agenda of the House of Bishops today was an evening "Fireside Chat" (the only fire in this case being the computer-generated image of a fireplace projected onto a screen). This is a free-form exchange. The Presiding Bishop usually makes a few opening remarks and then just opens the floor to comments and questions on ... whatever. It's a closed meeting, and is understood to be confidential. So I can't give any sort of narrative account of what was talked about there. I can, however, share my views on various current topics. Let the reader understand.

Earlier in the day, I preached at the two morning liturgies in Hendersonville, at the invitation of their rector, Fr Jody Howard, who contacted me way back in January to nail down this visit. It was a joy to worship with them. Afterward, Fr Jody and his wife Anna took us out to a place called Sopapilla's, which features New Mexico-style cuisine. We acquired a taste for fare of this sort on our vacation in Santa Fe last year. It was scrumptious.

The balance of the afternoon was consumed by lobby conversations with sundry colleagues and spouses, and then a nap.

David Chislett said...
This comment has been removed by the author.
8:18 AM

Thank you, Fr. In fact, I think that Pope Francis is like an old fashioned Anglo-Catholic - the ones I knew in my youth - . . . rock solidly conservative when it comes to the given-ness of the Faith, yet everlastingly kind and loving in his ability to embrace (with a sense of humour) those on the margins of belief and behaviour. In practice neither of these things are true of today's thoroughgoing Anglican liberals. For them creeds have become optional metaphors, Catholicism has been reduced to a set of aesthetic preferences (together with a dislike of evangelicals), and ministry itself has been hopelessly bureaucratised. Francis is by personal example recalling us all - whatever "side" we may be on, to rediscover the real essence of the ministry, and - more importantly - what it is just to walk with the Lord.

The level of self-delusion when looking at virtually any public figure these days is discouraging. And hardly anyone seems to understand the "pastor-theologian-politician" rotation in the office, so they cannot understand that Francis's successor surely will sound quite different in tone. All they want to hear is that he'll get with the liberal-secularist program, so that's what they hear.

Please know that the Executive Council is NOT attempting to sever the bond between TEC and the UTO, nor is Executive Council seeking at this point (and I personally would fight such an attempt) to absorb the UTO into the DFMS in a manner that would go against the "interdependent" model that Council has officially endorsed in all its recent resolutions (to my knowledge) on the subject.