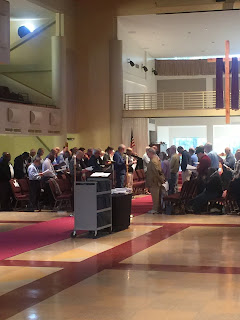 I hesitate to write what will now immediately follow. It will subject me to criticism and will disappoint people. And it's quite personal, not something I think I am morally obligated to share, to think about "out loud," as it were. But I am usually choosing to absent myself from corporate worship at HOB meetings (and, for that matter, General Convention). It is for the sake of my own soul, my own spiritual self-care, that I do this. But there is also an undeniable element of "breaking community" in my behavior, and I completely understand anyone who would want to call me to account on those grounds.

It's complex. I can certainly suck it up and deal with liturgy that's simply not the way I would choose to do it; I do that all the time. This is different, for three reasons. The first two are relatively trivial, and, on their own, would demand that I look past them. The third is more substantive.

The liturgy booklets contain parallel texts in English and Spanish, with the scripture readings also in French. But it's not like there's one whole service in Spanish and the rest in English--or one in English and the rest in Spanish. Celebrants and officiants who can do so credibly tend to jump from one language to the other in mid-paragraph. My Spanish, while not good, is decent. I could hang with it if it were all in Spanish. The jumping back and forth, however, is distracting beyond annoying. It puts me in a foul humor, which is not where I need to be when in worship. (For the record, out of 100+ bishops present, around a half-dozen do not function comfortably in English.)

The substantive part is that there is nary a service--whether Eucharist or Office--that simply follows the official liturgy of the Episcopal Church, i.e. the Book of Common Prayer (1979). And while a portion of the music for these liturgies is from the center of the Anglican/Episcopal tradition, much more of it is from the margins--unfamiliar to most, and sometimes difficult even for a trained musician. Now, I understand that there are authorized alternatives to Prayer Book services, and while I may not sympathize with the reasons for their existence, I believe I understand those reasons. But what we have is generally a mishmash: neither straight and clearly-identified BCP nor straight and clearly-identified EOW. Certain words in the liturgy or the Psalms are just emended unobtrusively to reflect current orthodoxy with respect to gender specificity. I wish those who plan the liturgies could just be more transparent about what we're doing. But what it feels like to me (I'm not imputing this as a motive or intention to anyone) is that I'm being film-flammed in a verbal shell game, with the huckster hoping I won't notice. I do notice.

All this is by way of saying: There was a Eucharist at 9:00 and Evening Prayer at 5:00, and I attended neither. Mixed feelings about that. No one needs to judge me because I already judge myself. (And I will be present at the Eucharist on the Lord's Day tomorrow.)

After the Eucharist, we were on "retreat" time, of which I availed myself to catch up on some emails and take a long, meditative walk.

Lunch was by provinces, so I joined my colleagues from Province V. We were asked to discuss what we would miss if the provincial structure didn't exist. For most of us, it was the opportunity to meet regularly with other bishops from the province!

The afternoon program was devoted to considering the work of racial reconciliation. The Presiding Bishop offered a homily (not technically, but every time he opens his mouth, a homily isn't far behind!) on last Sunday's epistle reading from II Corinthians about the ministry of reconciliation. (I resonated with what he said, because I rang that bell pretty loudly in my own sermon last Sunday.) He introduced four bishops who have been serving on a racial reconciliation task force, and each of them spoke to us briefly. This was followed up by table discussions. It's complex and daunting work because it requires an immense amount of truth to be told, but that telling, to mean anything, must be securely in a context of patient and vulnerable love.

Dinner was with "classes," and off campus. The Class of 2011--the twelve bishops who were elected in 2010--carpooled up to College Station to eat a Chuy's, a Tex-Mex chain. A good time was had by all. I am very blessed to be part of this special group of colleagues and friends. One among us had just had his Canon elected Bishop of Pennsylvania today, so there was both celebrating and commiserating. And, for what it's worth, we heartily toasted our absent spouses.
Posted by Daniel Martins at 11:35 PM

As a priest I feel the same at clergy retreats and Diocesan Convention. The liturgy often comes from the New Zeland Prayer Book, or some new age Celtic thing. I feel alienated from my brother and sister clergy. It is better if I do not go. By the time we get to the communion of the people I am too irritated to receive in a healthy state.

Some people cannot leave a good thing alone. I am wary of whatever the next BCP revision may look and sound like.

The solution to your difficulties, Bishop: earplugs and a Rosary.

As someone who doesn't learn languages easily, I have always envied the truly bilingual. However, I also find it annoying when someone inserts random phrases of a second language into an English discussion. (Or English into another language discussion.) I once shared an office with a Latina who like to do that. I solved the problem by telling her how much I envied her skills, but that I had noticed that she tended to lose track of what language she was speaking, and did she know that? She sputtered because of course she knew exactly what she was doing. A few discrete "Ah, your doing it again." solved the problem. Not something you can do in a service, but perhaps afterwards. ;)