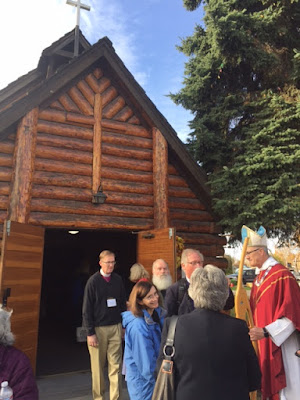 This being the Lord's Day, the morning was dedicated to worship. The visiting bishops and spouses were divided between (read: crammed into) three churches in the greater Fairbanks area. I was part of the group that attended St Matthew's, which was walking distance from the hotel, and which observed its patronal feast day today. The Presiding Bishop preached and the Bishop of Alaska celebrated. We were welcomed with over-the-top hospitality, and the entire occasion was altogether lively.

Shortly thereafter, we boarded buses and rode south and west on the highway toward Anchorage for about an hour, ending up at the village of Nenana, one of the 42 native villages in the interior of Alaska, and among those in which the Episcopal Church has been the major ecclesial presence and influence. There we were treated to a traditional potlatch, as the guests of honor. Feeding a couple of hundred guests in a room (the tribal hall) not designed to accommodate nearly that many was a feat of true logistical legerdemain. We were asked to remain seated--just in chairs, not at tables--while the young people of the community served a multi-course meal, the centerpiece of which was roast moose. (We were told that three animals were harvested for this occasion.) There were speeches galore by all sorts of tribal and ecclesiastical dignitaries, and lots of traditional singing and dancing, to the compelling beat of drums.

We got back to the hotel around 6:45. I gathered for light supper (most of us were still full from the potlatch) with seven other Communion Partner bishops and three spouses (there are more of us, but many aren't here). We have strategizing to do as the next General Convention looms on the horizon, and another House of Bishops in between, and a potentially shattering proposal to surgically amend the Prayer Book and catechism just with respect to marriage already formally in the pipeline.

Thank you for your comments bishop!