After a war in the area, and a family member's health crisis more recently, threatened to scuttle this trip, I am indeed about to walk out the door and spend the next 27 hours en route to a Tel Aviv hotel room. From there, a week of guided touring with about a dozen other Christian pastors. We'll be doing the usual stuff: Mediterranean coast, Galilee (and the sea thereof), Masada, the Jordan River and Dead Sea, Bethlehem (we've been told) and Jersusalem.
I'm not bringing my laptop and while internet access at hotels is available, it's a little spendy. I may post something from time to time while I'm there, but I expect to bore all of you with an extended illustrated travelogue when I get back.
Pray for the peace of Jerusalem.
Posted by Daniel Martins at 7:59 AM 1 comment: Links to this post

Another snippet of my participation in the ongoing HoB/D discussion on the repeal of B033. Among those who post there, the sentiment is overwhelmingly in favor of either replealing it or eclipsing it with another (contradictory) resolution or canonical action. I am dubious that these posters represent as statistical "mind of the house."
At any rate:

I find myself flummoxed by assertions that B033 was a "failure." That depends, I suppose, on what one considers its purpose to have been. As I understand it, the purpose was to get our bishops to Lambeth and to keep our Presiding Bishop at the Primates' Meeting. Well, our bishops (minus one) were at Lambeth, and, as far as I know, Katharine is planning on being in Egypt next month. Sounds pretty much like a success to me. That some (most who are vocal on this list, at any rate) consider B033 too high a price to pay for such success I totally get. But it is manifestly not a failure if it is evaluated in terms of what it was designed to accomplish.

Posted by Daniel Martins at 3:13 PM 5 comments: Links to this post

With General Convention looming now less that seven months away, the HoB/D listserv is beginning to heat up over potential specific resolutions. One of these--not yet crafted and submitted to my knowledge--will be to repeal Resolution B033 from 2006--the one that, by some accounts, effects a moratorium on the consecration of more partnered gay bishops. I share below my own most recent contribution to the conversation.

No surprise here, but I'm going to weigh against anything that even smells like repealing B033.  Not that I was particularly crazy about it at the time; I didn't think it was strong enough, and was dismayed that it did not address the question of the blessing of same-sex unions.

Posted by Daniel Martins at 9:26 AM 7 comments: Links to this post

I don't have anything terribly profound to say about this feast, which is probably in itself profound.
Mostly, I'm grateful for the opportunity to be part of a community that is willing to keep it with me. It's a lot to ask of people to come to church on a weeknight--some to serve at the altar, some to read, some to sing in the choir, some to fix the post-liturgical repast--especially when freezing rain is in the forecast. But I asked, and about 70 of them said yes. That's about half of our total attendance on a typical Sunday. Certainly critical mass (pardon the pun) for soul-satisfying worship.
To paraphrase Ray Kinsella, "If you feed them, they will come." So we had spaghetti and garlic bread and salad ... and a little red wine for the grownups. Three of our high school thespians did a brief "reader's theater" presentation adapted from Matthew's and Luke's gospels. People lingered, enjoying one another's company.
Before that, in the liturgy, we began in dark silence (or was it silent darkness?). After a greeting mentioning light, and a snippet from the prologue to John's gospel about the light that the darkness could not overcome, the altar candles, and the people's hand candles, were langorously lit. Then, while everyone sang the (really) ancient Greek hymn Phos hilaron (usually rendered "O gracioius light," but I like to think more literally: "O hilarious light!"), I walked around the altar swinging incense, which, to tell you the truth, is one my favorite things to do.
The homily was a "children's sermon" (not a frequent event in my minsitry). I gathered them around the creche and sort of did the Art Linkletter thing (if you catch that allusion, you're really old; if not, don't worry), hoping, of course, that the adults would overhear, because I was wanting to get through to them as much as to the kids. I suspect it probably worked, at least a little bit.
Oh ... and I got to sing "Brightest and best of the stars of the morning," which, if I didn't get to sing it, would rob me of that old "Epiphany feeling." See, I'm a little eccentric in what I get sentimental about.
The Lord has shown forth his glory: Come, let us adore him.
Posted by Daniel Martins at 10:21 PM 1 comment: Links to this post 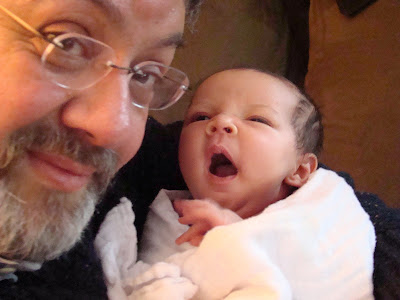 My first grandchild--Charlotte Louise Martins Washington--was born three weeks ago tomorrow. But since her house is 537 miles away from mine, Nana Dragonfly and I were not able to meet her personally untl yesterday. She's a beauty, alright, and we are thrilled to begin our relationship with her. She won't remember it, of course--though, God knows, there will be plenty of pictures to prove to her that the event took place.
Most of what needs to be said at a moment like this, of course, is inarticulable--except, perhaps, in poetry, and I don't have that particular muse just right now. It is a liminal time, suffused with mystery. My grandparents saw the 19th century. It is not at all inconceivable that this grandchild (and any who may follow her) will see the 22nd. Awesome.
In the meantime, check out the effect I have on her: 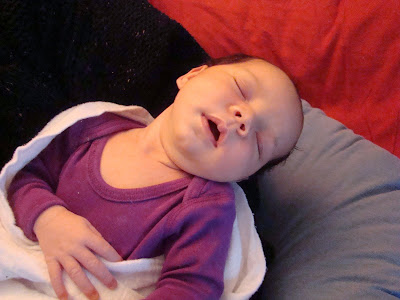 Posted by Daniel Martins at 3:58 PM 7 comments: Links to this post