St Paul, A Slave Girl, the Holy Spirit, and the Presiding Bishop 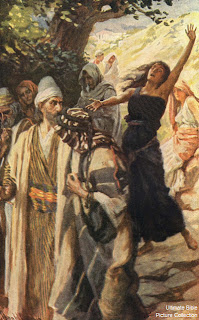 The Presiding Bishop of the Episcopal Church, the Most Revd Katharine Jefferts Schori, delivered a sermon on May 12, the Seventh Sunday of Easter, at All Saints Church in Steenrijk, Curaçao, which is in the Episcopal Church's Diocese of Venezuela. The first reading for that day was from Acts 16, which recounts the experience Paul and Silas had in Philippi, where they cast out a demon from a fortune-telling slave girl, and were then imprisoned at the behest of her traffickers on account of the economic harm the exorcism had caused them.

This sermon has slowly become a bit of "a thing" in cyberspace over the nearly two weeks since it was delivered. Here's why:

Paul is annoyed at the slave girl who keeps pursuing him, telling the world that he and his companions are slaves of God.  She is quite right.  She’s telling the same truth Paul and others claim for themselves. But Paul is annoyed, perhaps for being put in his place, and he responds by depriving her of her gift of spiritual awareness.  Paul can’t abide something he won’t see as beautiful or holy, so he tries to destroy it.  It gets him thrown in prison.  That’s pretty much where he’s put himself by his own refusal to recognize that she, too, shares in God’s nature, just as much as he does – maybe more so!

Criticism has been fierce, beginning with all but one of the comments on the ENS website posting of the text.

This is awkward. Because of my position in the system, Bishop Jefferts Schori is not an abstraction to me. She is someone from whom I have sat across a table in several meetings of the House of Bishops. She is someone who sends me a hand-written note on my birthday and the anniversary of my consecration. She is someone who very kindly checked in on me by email while I was recovering from heart surgery, for which I was immensely grateful.

Yet, I feel constrained by the vows I took when I was ordained a bishop--vows that she herself formally required of me--to "guard the faith, unity, and discipline of the Church of God." These vows do not permit me to remain silent, even as I also remain respectful and charitable. And precisely because the Presiding Bishop is a real person to me, someone I will have to once again look in the eye several weeks from now, I'm not saying anything about her that I would not say to her; in fact, I will be sending her a link to this blog post as soon as it's up.

To call Bishop Jefferts Schori's exegesis of Acts 16 "strained" or "eccentric" is too mild. It is utterly bizarre. But others have done an adequate job fisking the sermon. I'm going to cut right to what seems to me a rather larger and more fundamental issue, which is the duty of all Christians, but particularly those in ordained leadership, to operate from within the tradition, as an insider looking out, and not from a critical distance, as an outsider looking in. The Christian tradition (a term I use in what I think is an Eastern Orthodox sense, inclusive of scripture, liturgy, ascesis, and the mainstream of theology) is certainly an appropriate object of critical inquiry by detached outsiders, whether sympathetic or hostile. But such critical inquiry is not in the remit of a bishop; in fact, bishops pretty much surrender the option of engaging in that sort of work the moment they are consecrated. A bishop is, by definition, by job description, thoroughly a conservative, operating as a custodian of the tradition and articulating an insider's point of view. Is there room on the margins for prophetic voices that challenge the establishment, speaking words of truth and justice? Yes, there certainly is room for those voices. But they are not the voices of bishops. It is, rather, the job of bishops, speaking as consummate insiders, to equip the baptized faithful to listen to the voices from the margins and discern between true prophets and false ones.

As an insider looking out, as an apologist and cheerleader for the establishment, a bishop sits under the authority of the tradition, particularly the authority of sacred scripture. There are interpretive roads that are open to others--outsiders looking in--that are properly closed to bishops (and, by extension, to priests and others who preach and teach). In Acts 16, the author (presumably Luke) portrays Paul and Silas as the good guys, the slave girl as the exploited victim, and her "owners," along with the demon that possessed her, as the bad guys. What Paul did, operating in the power of the Holy Spirit, was to liberate an oppressed person. There is a homiletical treasure trove available here without disturbing this essential dynamic. To stray outside it only tortures the text. And I suspect that Bishop Katharine's concern that we recognize the image of God in one another could have been well-supported by the readings for Easter VII without so straying.

One of the great temptations for either a theologian or a pastor is to be original. It's a tonic to the ego. Under the right circumstances, a theologian can get away with it. St Paul certainly did! A pastor, by contrast, eschews originality. A pastor, a bishop, is a relay runner, handing along (para-dosis, the root of "tradition") the baton to the next runner, the next generation. Originality is not compatible with that job description.

Posted by Daniel Martins at 11:21 PM 12 comments: Links to this post