Happy All Hallows Even 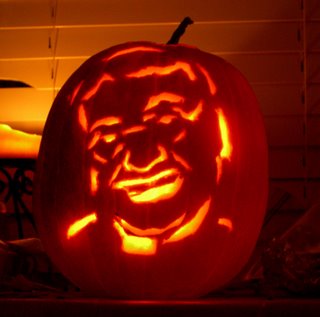 The youth of my parish had a Hallowe'en party yesterday and one of them apparently saw fit to immortalize the visage of her rector in the medium of a sculpted pumpkin. Well, not "immortalize" exactly; the pumpkin will rot, as indeed will I, though, I hope, somewhat later.

I am barely even an amateur psychologist. I know enough to be dangerous. (I know what you're thinking: "Is he any better a psychologist than he is a statistician?") And while I don't uncritically accept everything Carl Jung ever wrote, he is something of a taproot for me. And in that vein, my concern-that-is-not-quite-anxiety over sharing a fate with the carved pumpkin that represents me gets to the spiritual heart of Hallowe'en. Tomorrow is All Saints' Day (All Hallows)--a luminous feast in which the Christian family celebrates its essential unity across not only space but also across time, and therefore also across the exquisitely thin membrane that separates this world from the world to come. I've long thought that Thornton Wilder's play Our Town offers a wonderful insight into the mystery of the creedal affirmation of "the communion of saints." (In the era of my own youth, at least, this was produced by virutally every high school drama department approximately every four years.) During the course of the action, characters die, and move to the village graveyard, which consists of a couple of rows of chairs on one end of the stage. There the deceased are not silent, however; they observe and comment on what's happening at the center of the stage. There's a divide, but it's a porous divide. Everybody is on the same stage, part of the same story.

All Hallows' Eve is the Jungian dark side of the light-filled feast of All Saints. Tonight we confront our uneasiness about the fact of our mortality, not yet with the triumphant assurance that we have been "knit together in one communion and fellowship" (Book of Common Prayer, Collect for All Saints), but by mocking, trivializing--in street vernacular, "disrespecting"--the powers by which we feel threatened. We thumb our noses at death and decay by dressing up in it and making it the subject of a burlesque. I would suspect that the genre of horror movies, which have been inescapble to channel surfers for about the last month, and which will mercifully go away after tonight (I don't like them), is an attempt to do the same thing.

Now, I realize that there are some Christians who in recent years have worked up a lather trying to trash Hallowe'en as nothing more than a pagan holiday. Well, yes, there was a northern European pre-Christian observance that had some of the themes we associate with Hallowe'en. But I would suggest that those who carry such concerns might consider doing three things: 1) learn about All Saints' day and the doctrine of the communion of saints, 2) read some Jung, and 3) stop celebrating Christmas, at least on December 25th, because it too is linked to a pagan celebration.
Posted by Daniel Martins at 4:15 PM

A Big Guy Jack O' Lantern! I love it, who did that?

oh, this is sarah by the way

People who read my site are envious that I live close enough to the Amish to post a picture--they call it Amish Envy. Well, now I have Jack-O-Lantern Envy. How nice to have someone think enough of you to care your likeness on a rotting squash--really. The rot doesn't bother me, actually. Who needs a stone monument anyway. I think the pumpkin is much more endearing.