I don't dislike animals. Often I even enjoy them. I've toyed with the idea of getting a talking bird, and teaching it liturgical responses. (OK, I'm a liturgy geek. There are worse things.) But I'm realistic enough to realize that I would not be happy as a pet owner. It's a big responsibility, and there are too many other worthwhile things going on in my life that I want to pay attention to.

That said, the same concerns, alas, are not shared by those who have shared and continue to share my domestic life. At present, my living space is invaded by a five-year old Border Collie named Lucy (aka Lucifer) who belongs to my wife Brenda and a six-year old psychotic male orange tabby who is a vestige of my younger daughter's need to decompress when she lived at home for a few months following her college graduation. Brenda also feeds an eleven-year old long-haired female tabby who abandonded us some years ago for the front porch of some neighbors two houses up the street. 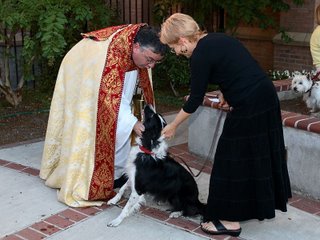 Given my general temperament, then, I have never, in seventeen years of ordained ministry, succumbed to the increasingly popular practice of liturgically blessing animals on or around the feast day of St Francis of Assisi. Until now. Maybe I've had a pastoral epiphany. Maybe I'm getting all emotionally squishy in my old age. Maybe my Jungian uncounscious really adores animals. Or maybe I'm shamelessly pandering to popular demand. But with comparatively little publicity, 31 humans, an uncounted number of dogs, one (very brave) cat and one (rather oblivious) fish turned up in the Hoffman Memorial Garden at St John's this afternoon for the Blessing of Animals. There were only a couple of minor canine scuffles. Beyond that, everything went smoothly and expeditiously, and everyone (the humans, at any rate) seemed pleased.

When I was first ordained, the rector whom I served as curate told me he had abandoned the practice because some child's pet rodent had keeled over and died immediately upon receiving a blessing. Such events raise rather tricky issues of pastoral theology that a prudent cleric would want to avoid if at all possible. By God's mercy, I was spared such a fate today, for which I am immensely grateful. So I suppose I'll do it again next year.

I do apologize to St Francis, though. He has, I fear, been kidnapped by the cult of cute. Were he alive today and doing what he did, there are several diagnosis codes in DSM IV that would apply to him, and he would probably be institutionalized, or at least under a conservatorship. He was crazy for the sake of the gospel, and I'm not sure that blessing pets does justice to the virility of his witness.
Posted by Daniel Martins at 12:51 AM

I do wish we could have been there to witness this because without more pictures I'm afraid I can't believe it.

I would not have believed it either if I had not been there! However, I was definitely there with my two 15 year old Yorkies, Mousie and Christy and Fr. Dan did, indeed, bless them both individually, by name and they are still both breathing to tell the tale. Coming out of ones "comfort zone is a good thing...at least that is what Fr. Dan tells his congregation!

Fr. Dan
It appears you are in cassock, surplice & cope??? Since this is St.
Francis we're talk'n about...shouldn't you have also taken his example of renouncing all trappings of authority and done these blessings in the buff? The rest of us do. It's much easier to get the dog & cat hair off.

Anonymous, thy name is coward! Uncloak yourself and take responsibility for your slur against my liturgical haberdashery!