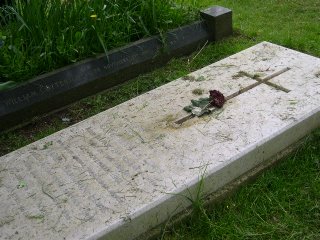 In the liturgical calendar of the Episcopal Church (of which--yes--I am still a member by virtue of being a presbyter of the Diocese of San Joaquin), today is the optional observance of the lesser feast of "Clive Staples Lewis, Apologist and Spiritual Writer (1963)." In Christian tradition, the obervance of a saint customarily takes place on the anniversary of that person's death, and this is the date in 1963 when Professor Lewis passed into the life to come at (what now seems to me) the tender age of 65. This photo is one I personally took of his gravestone (he and his brother are buried one on top of the other) in the churchyard at Holy Trinity, Headington Quarry Parish, Oxford.

Lewis is undoubtedly the Anglican who is best known in the non-Anglican world. (And possibly better respected by non-Anglicans than by his co-religionists.) Without a close second (though Martin Thornton is gaining ground), he is the single greatest human influence on my own theological and spiritual formation, and the energy behind the sort of pastoral care I so feebly attempt to deliver. So I'm exercising the "option" of keeping the feast today.