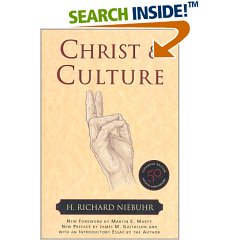 The whole "Christ and culture" question (kudos to H. Richard Niebuhr, whose 1951 book by that name still frames the discussion) is complex and, for me, infinitely fascinating. This is the time of year when I feel the tension between the "Christ of culture" and "Christ against culture" models most acutely. They grind like tectonic plates.

In days of yore (aka my childhood), "Christmastime" didn't even think about beginning until at least the day after Thanksgiving, and even then rather slowly and gradually, reaching and sustaining a peak in mid-December, and hanging on until the first work/school day of the New Year. As I recall, my family-of-origin put up our Christmas tree around the second or third week of the month, and left it up until New Year's Day, which was a convenient time for taking it down. And nobody seemed to mind the word "Christmas." The vanguard of the political correctness movement admonished us to add "and Happy Hunukkah" after "Merry Christmas" in any generalized public seasonal greetings, which is all well and good, but the fact is, growing up in what were then mid-to-outer ring western suburbs of Chicago, I didn't know more than a handful of Jews, and as I later learned, Hunnukkah is a second or third tier Jewish festival that doesn't carry anywhere near the weight for Jews as Christmas carries for Christians.

Of course, there was a good deal of grousing and complaining about the "commercialization" and "secularization" of Christmas (symbolized by a disdain for "Merry Xmas" signs--ignorant disdain, it turns out, as 'X' is the Greek letter "chi" which is the first letter of "Christ"and therefore an ancient and accepted abbreviation with no secularizing undertones). Santa Claus, despite the fact that his cult is derived from that of an actual Christian saint, was the hapless icon of this commercialization and secularization.

Fast forward to the new millenium, and what passed for commercialization and secularization in those days of yore now seems to be veritably the practice of Christian religion, and Santa Claus, precisely because of his association with Saint Nicholas, is an integral part of that "religious Christmas" we have lost to "holiday trees" and "holiday carols" and "holiday parties" and "holiday gifts." "Happy Holidays" used to mean "both Christmas and New Year's"--or so I understood it. Now it means...well, what does it mean, actually? It includes Hunnukkah, of course, and, apparently, Kwanzaa. What else? Festivus, perhaps?

Retailers know what they're celebrating, I'm quite sure, but I don't know that very many others do. Most, I think, are celebrating celebration. It's an excuse to party. That's OK. Just don't be wishing me "Happy Holidays." I may not take it well.

As a liturgical Christian, I'm swimming upstream in two channels at once. In my world, not only is it "Christmas" rather than "the holidays," it isn't even Christmas until...well...Christmas, or the eve thereof, at any rate. And then it continues--with trees still up and fully decorated--until January 6th, several days past the time when the "world" has settled into January humdrum. So while I'm dutifully frowning at retailers for their "holiday" muzak that begins around Hallowe'en, I'm also a sworn member (by virtue of ordination) of the Advent Police. (And, hey, Advent doesn't even begin for another week!) If the Advent Police were the sheriff's department in Mayberry, part of me would be Barney Fife wanting to ban red and green sweaters from church all during Advent, and decline all invitations to Christmas parties until after the 25th. But the other part of me would be Andy Taylor, who, as we know, never let his deputy carry a loaded weapon. So I'm pretty harmless. I control what I can--i.e. what happens inside St John's on Sunday mornings, and in my own home, to a limited extent--and roll with the rest. Some Valium would help, but I don't presently have a supply.
Posted by Daniel Martins at 4:32 PM

I recognize that putting the tree decorating the tree just a couple of days after Thanksgiving is pushing the calendar, I find the practice of becoming mesmorized in the world created by the lights and ornaments in an otherwise dark room irresistable, regardless of the season. I can't put the tree up in June, so I'll do it today instead, revel in it's beauty for weeks and weeks, and celebrate Christmas later when I'm supposed to. It's important to break all these traditions down and compartmentalize them.

Well, since Canadian Thanksgiving is in October, putting a tree up right after Thanksgiving would be extreme overkill for me! I do, however, put up the tree around the second week of December, for the simple reason that we have a live tree, and if I waited any later I would have trouble finding a tree to buy.

We celebrate Advent as a family by making an Advent wreath every year, and lighting the candles and praying before supper. This year I even managed to have most of my Christmas shopping done before Advent starts, the better to free my mind for the things that count.