We have no "major holy day" today, beyond being in the midst of a festal season, but we do have a "lesser feast" of more than passing importance. This is the commemoration of St Thomas of Canterbury, aka Thomas Becket. There's a delicious scene from the 1964 film Becket, with Richard Burton in the title role, and Peter O'Toole as King Henry II (a clip is available here, but I do not have the technical smarts to provide a direct link), in which Henry reveals his brainstormed plan to place Thomas--his chancellor, drinking buddy, and whoring partner--in the suddenly vacant See of Canterbury, thinking he would thereby have his own inside man on the throne of St Augustine. Thomas tried to dissuade him. Henry should have listened.

The current axiom among cynical Episcopalians (if that isn't a redundancy) is that, when a new bishop is consecrated, the huddle of co-consecrators that obscures him from the view of the congregation for a minute or two while the actual deed is done actually masks a surgical procedure--the removal of the spine! In Thomas Becket's case, the opposite was the result. He grew a spine, repented of his dissolute ways, and stood up for the rights of the Church in the face of assaults from the Crown. Henry is then said to have uttered the rhetorical question, "Will n 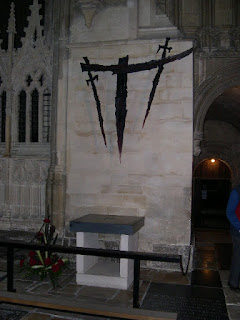 o one rid me of this meddlesome priest?" Some of his aides apparently took him seriously, and on 29 December 1170, they dispatched the Archbishop in the north transept of Canterbury Cathedral. Pictured here is the shrine now on that spot, which it was my great joy to visit and offer prayers at in April of 2005. (In 1981, Pope John Paul II and Archbishop Robert Runcie prayed together at the same spot.)

Becket was relatively quickly canonized, viewed as a martyr, and Canterbury Cathedral became a major place of pilgrimage in the late Middle Ages, thus providing the inspiration for one of the classics of English literature, Chaucer's Canterbury Tales. (I still recall the intermittent snickers erupting from my classmates in high school World Literature as we read together, silently but simultaneously, The Miller's Tale, which is on the racy side--at least by 1968 suburban Chicago standards).

Some 836 years later, St Thomas' successor on Augustine's throne, Rowan Williams, is in as much a need of a backbone as anyone who ever donned a miter. He is universally lauded as a theologian and scholar, and is undeniably in possession of a world class brilliant intellect. Not everyone agrees, however, with respect to his political and leadership skills and instincts. Many, on both the right and the left, think he's in over his head. I tend not to be in that camp. His latest letter--well-dissected elsewhere in cyberspace, but particularly here--exhibits idealism, wisdom, prudence, pragmatism, and hope all in one place. I pray for him daily.
Posted by Daniel Martins at 2:33 PM