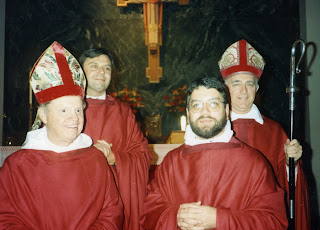 There's no particular reason to mark the seventeenth anniversary of anything, except perhaps that it's a prime number, and that should count for something. Anyway, seventeen years ago tonight I was ordained a priest at St Luke's Church, Baton Rouge, Diocese of Louisiana.

Those who know me will no doubt attest that I haven't aged a day.

Over my left shoulder in the picture is the good bishop who did the deed, James Barrow Brown, now retired. I remember him with fond gratitude, because he cheerfully took me in as a homeless deacon, having been more or less cut loose by my originating diocese. The other mitred man on my right is John Maury Allin, XXIII Presiding Bishop of the Episcopal Church, who, in fairly recent retirement, was the preacher for the occasion. He was a bit of a giant of the sort they don't make anymore. May he rest in peace. We had the honor of his presence, I recall, because he was related by marriage to the then rector of St Luke's, Charles Jenkins, now Bishop of Louisiana.

The other fellow in the photo was ordained along with me, both of us serving as curates at St Luke's. The last I heard of Jim Anderson was when he wrote me in 1994 to say that he was resigning his ministry and leaving the Episcopal Church. I hope he found what it is he was looking for. 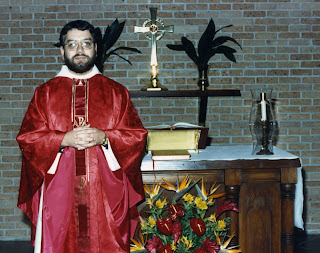 The next day, on the Feast of St Thomas the Apostle, I celebrated my first Mass--a liminal moment for a priest. The feeling cannot really be described. I was fortunate to begin my ordained ministry in a large, healthy, and vibrant parish. It was an affirming experience on which I "imprinted," and which therefore sustained me through some less affirming moments as a Vicar and Rector in the ensuing years.

Re-connecting with my sense of vocation-- striking the original match, so to speak--is a salutary blessing as I try to discern the voice of the Holy Spirit in this time of heightened ecclesial angst. Yes, we live in a difficult historical moment, a moment that I am finding demands every ounce of wisdom I might have, and every impulse toward self-differentiation I can muster. But it is all done in the context of, and for the sake of, being a bread-breaker and word-proclaimer to a particular community of Christians who are trying to get through the changes and chances of this life and somehow come to look more like Jesus in doing so. Whatever organizational, administrative, rhetorical, and political tasks I might engage as I fulfill my ordination vow to take my share in the councils of the church, it's all done for the sake of helping people learn to live in the Kingdom of Heaven, to be able to look God in the eye and not be turned to dust.

This is often what makes it possible for me to get out of bed in the morning.
Posted by Daniel Martins at 1:20 AM

How grateful I am for that event 17 years ago for as a result I have been blessed to be under your wisdom and guidance as a member of St. John's. You are loved, Fr. Dan! May the Lord continue to bless your ministry for another 17 years plus 17 plus...!