In Search of the Transcendent Feminine 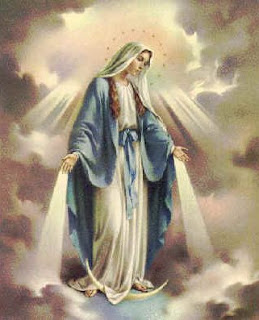 As an Anglican who was raised and formed in a free-church evangelical milieu and who regularly casts an eye Romeward thinking, "What if …?", today's feast ("St Mary the Virgin" in Episcopalian parlance, "the Assumption" for Latin Rite Catholics, "the Dormition of the Theotokos" for the Orthodox) is a significant marker in the ecclesial ferment in which I live and move and have my being.

During my recently-concluded vacation, I read (and very much enjoyed) Ken Follett's World Without End, a novel set in fourteenth century England and in which the Black Plague is one of the main characters. The narrative suggests that the terror associated with the Plague helped spur an increase in devotion to the Blessed Virgin. As a sympathetic feminine presence, many perceived her as more accessible than God, who was too busy being God (including sending the Plague to punish miserable sinners) to be a likely source of succor. Sometimes we just need a Mom.

Of course, a couple of hundred years later, the Reformers responded strongly to what they perceived as excessive devotion to Our Lady, believing it to compromise the unique mediatorial office of her Divine Son. Ever since, she has been a lightning rod in the various controversies between the Catholic and Reformed traditions in western Christianity. My sense is that both sides have indulged in hyper-reactivity to one another. Protestants are generally downright Mary-phobic, forgetting her own words in scripture, "All generations will call me blessed." And while I don't impute this to official Roman Catholic teaching, the Marian piety of many Catholics does seem a little "over the top," giving rise to jokes like the one about Jesus walking into St Patrick's Cathedral and trying to get the attention of a woman kneeling in prayer. Her response? "Don't bother me. Can't you see I'm talking to your mother?"

We are not, thankfully, suffering today anything like the Black Death of the fourteenth century (estimated to have wiped out perhaps half the population of Europe). But we apparently still need a Mom. As long ago as when I took the General Ordination Exams (1989), I knew to be careful not to use masculine pronouns for God, and to be parsimonious in my use of "Father" and "Lord," lest I arouse the ire of those who would be evaluating my work. More recent seminarians inform me that committing such offenses in academic writing these days yields an automatic 'F.' Experimental liturgies, Anglican and otherwise, are not at all shy about giving 'Mother' at least equal time with 'Father' in referring to God, and the routine use of the feminine pronoun in speaking of the Holy Spirit is increasingly widespread.

I'm not going to do any heresy-jousting in this post, beyond saying that there are all kinds of theological reasons why these things really creep me out. Curiously, the impetus for such licentiousness in theological language is much lower among our Roman Catholic friends. Yeah … I know … not entirely absent. But much lower. Of course, one can attribute that to a very hierarchical polity with a small group of single old men at the top of the pyramid. But I think that's a simplistic explanation. I think the main reason Roman Catholics and Orthodox don't feel the need (as much) to feminize God is that they already have a Mom, and they know who she is, and they're comfortable bending her sympathetic ear.

As an Anglo-Catholic (and loyal son of Nashotah House), I like to think I'm on friendly terms with the Mother of God. I pray the Angelus and the Regina Coeli. I pray the Rosary (the real Rosary, with the Joyful, Sorrowful, Glorious, and now Luminous Mysteries—not an "Anglican" surrogate). Many other Anglicans do as well. This is well and good. But I would suggest, with apologies to Emeril, that we need to "kick it up a notch." For many Anglicans who have any Marian piety (and I'm looking in a mirror here), it is yet too conceptual, too cerebral. We need to make it more a matter of the heart. It's a good thing to honor and revere the Theotokos. It's a still better thing to love her. She is, after all, our Mom.

As a recovering Protestant, I had a lot of trouble with Mary at first. I have come to be able to pray the occaisional Hail Mary. I always genuflect to her shrine after Communion and have even lit the odd candle here and there at that same shrine.

I still cannot say the Rosary with any comfort and I am of the mind that I might never be able to.

But what has allowed me to make whatever progress I have made in my relationship with Mary is just like you said. "It is better to love her." I do love her. My love for her arises out of my respect and admiration for her. It is taking that respect and honor to a new and more profound level.

She truly is our Mom and what a remarkable Mom she is. I think that her Motherhood not just of Christ but also of the Church (as she is the first Christian and first among the saints) is key to realizing the love for her which is her proper due.

And, hopefully, honoring Mary, will lead to honoring womanhood in a holy way...not angry femininism, rejecting motherhood and life, not lewd depersonalization, domination, etc...and truly understanding God's aim for the sexes in His Church and for marriage...I guess this is a prayer more than a comment.

And, Mary is the icon of the Church, given to John, the disciple who personified 'first love' devotion for Christ, at the foot of the Cross.

No one can be disciple and no one should be clergyman without having Christ as his first love.

I, too, grew up in American-Evangelicalism. The rector of my Anglo-Catholic parish and I go round and round in a good-natured way about the proper consideration for Our Lady.

No professor ever said a word to me, no makes taken off on my papers or exams, and nothing mentioned by graders of my GOE's. I know a few students didn't like it, but what were they going to do - tell me I didn't have the right to image God as I desired but they did?

It is easy to catch pseudo-liberals and to turn "political correctness" and "identity politics" on its head.

In Costa Rica, the Feast of the Assumption, a national holiday, is also celebrated as Mother's Day. Very appropriate. (Father's Day is the same day in June as in the USA).

I have a strong affection for Mary and have two different "portraits" around my house. Talk about a Jungian Archetype. My wife and I toured the Notre Dame Cathedral in Paris and I was a bit disappointed in how large the statue of Mary was in comparison to the statue of Christ. I think that is a physical representation of the rub for us folks who are not Roman Catholic. Dcn Dale

I hear you. I went to a certain cathedral in Dallas once looking for a good place for some quality contemplation during Lent. I couldn't get over that a huge statue of Mary was front and center behind the altar, while the crucifix was off to the side. In a chapel off to the side was another big statue of Mary holding the Christ child. I thought the same thing that you did. Here is a perfect representation of the difference between Anglo and Roman Catholicism.

In my parish, Mary's shrine is in a place of honor to the side of the altar. We file past it after Communion casting respectful nods and prayers her way only after communing with her Son and giving Him our full attention first. He is represented behind the altar as he should be.