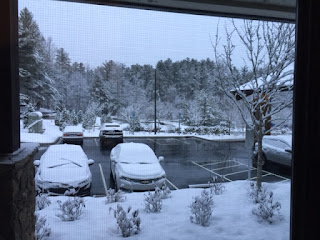 We woke up this morning to about three inches of fresh snow. Here's the view from my room. It was lovely, not only for the way it looked, but because all but a trace in isolated shady patches was gone by midday. That's the best kind of snow, in my opinion.

The day's schedule was ... more of the same. More than a handful of bishops were considering stabbing themselves in the eye with a pencil, including YFNB, but we all resisted the temptation, I'm relieved to report. Yet, even in the midst of that procedural drudgery, there were some treasures to be mined. To be reminded of the distinction between feedback that is conditional, related to behavior, and feedback that is unconditional, related to a person's being, I found helpful. Both kinds can be either positive or negative. The goal, of course, is to avoid giving feedback that is both negative and unconditional.

My hackles were raised a bit by a presentation about subtle versions of discrimination that our facilitators suggested can cloak visceral antagonism with a more respectable façade. A little autobiography might be appropriate here: My mother is a southerner by birth. Visiting her hometown when I was young, I am old enough to remember Jim Crow segregation in all of its ugliness. As a pre-teen and teen, I was s strong supporter of the civil rights movement of the 1960s. The absurdity of prejudice based on skin color was patent to me. Our presenters labeled this "old-fashioned" racism. "Modern" racism looks for reasons that sound more respectable but have the same deleterious effect on the "excluded" group--like opposing a program that requires one's children to be bussed to a school an hour a way when there's one right in their neighborhood that they could walk to. While I agree that it possible to mask racism (or any other "ism") in such a way, I am not prepared to use as broad a brush as it seemed to be that our presenters were ready to use.

That said, when one of my tablemates invited me to process the question through the lens of being a "theological minority" victim of such subtle-discrimination behaviors (unhelpful "rescuing," blaming the victim, avoidance, denying differences, denying impact), I must acknowledge that it began to make some sense. Much to ponder.

We are now finished with the presentations from Visions, Inc. Tomorrow we move on to other things. So this is probably the place to say that I wish there had been a much richer theological context to what we did. Visions, Inc. is, I think, Christian-friendly, but not Christian-based. They have a lot of clients in the secular world. A group of Christian bishops should be engaging the issues of racism and racial reconciliation from a platform grounded deeply in our  scriptural and theological tradition. The closest we got to that was this morning's table-group bible study, from Ephesians 2, which is magisterial in its relevance to what we're doing. If we had just spent our whole time together mining that material, we would have been better served.

The afternoon concluded with a celebration of the Eucharist for the Second Sunday in Lent. Many of us wish the Eucharist had been in the morning. It didn't feel like Sunday today; it didn't feel special. Worship at House of Bishops is tricky for me. I don't find it a "safe" place spiritually. Yes, I get "triggered"! So I've been taking a walk instead. But, today being the Lord's Day and all, I went. And I was reminded of all the reasons I've gotten in the habit of staying away (texts from Enriching Our Worship, Spanish laced in throughout, metrical paraphrase of the creed, music 75% from the black gospel genre, etc.)

The sermon, by the Bishop of Washington, contained a comment that I found encouraging. The preacher mentioned that she has some churches in her diocese that she could not in good conscience recommend to somebody who is looking for a church--not because they differ from her theologically or in liturgical preference, but because of a lack of spiritual vitality. Many bishops nodded that the same is the case for them. I've thought about it, and I am not in that category. In the Diocese of Springfield, there are Eucharistic Communities that are more "my cup of tea" than others. But, if I were talking to somebody looking for a church in any of the cities or towns where we have one, I would not hesitate for a moment to recommend the one nearest them. For that, this evening, I am immensely grateful.
Posted by Daniel Martins at 9:13 PM

The nearby large southern city has an extensive legacy busing program. Recently one of the TV stations interviewed parents about how they saw it, as it was being reviewed by the courts. Unless you watched the screen, you could not tell whether they were black, brown, or white. They all hated it because of the wasted time and disruption of any sense of community. Hopefully once away from the hothouse of "micro-agressions" of the HOB, common sense will reassert itself. :)

They should bus some of those in the theological majority to church on Sundays in your diocese. Lets see how they like that!

i support this blog thanks for sharing!

In the spring, at the end of the day, you should smell like dirt , Thank you for sharing this blog. keep it up

Amazing blog post as always! I am very glad to see your post, I located what I was in search of here. Thank you!