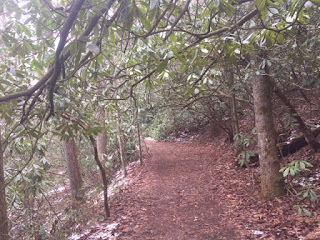 This is a forest of giant wild rhodedendrons through which the trail that allows circumambulation of Kanuga Lake passes. It's really quite striking. I walked it this morning during some free time.

Ah ... free time. The plenary schedule finally lightened up today. My own schedule, however, did get an early start, with a 0730 gathering of Communion Partner bishops. We were never actually all together--some aren't here, or aren't still here, and among those who are, there was a lot of coming and going due to conflicting obligations. We broke for breakfast around 0830 and then regathered until about 10.

At that point I kept an appointment with a reporter for Episcopal News Service who wanted to interview me about my experience of this meeting of the HOB. I didn't tell her anything I haven't already written in this venue. She was quite solicitous, but my frustration about such things is that, out of our twenty minute conversation, there may be two things I said that will get quoted in her article, and maybe or maybe not in an appropriate context. I understand that's how the system works, so I'm not getting worked up.

So we didn't convene in plenary session until after lunch. Apart from singing Happy Birthday to the Presiding Bishop and the Bishop of Western Kansas, there were two highlights of the afternoon:


Between our adjournment and dinner, I took the opportunity for some more walking. Yesterday's snow is gone, but it is miserably cold and rainy. This is why I never have pleasant memories of Kanuga; we're always here in March! 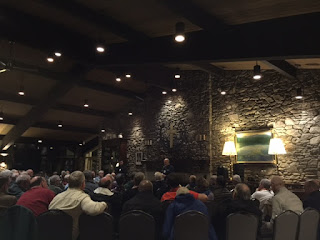 After dinner, we observed one of the mainstays of HOB meetings, the Fireside Chat. With the number who are here, as you can see, it's not a cozy affair, despite its name. It's also not, strictly speaking, "chatty." It's pretty well scripted, though there is opportunity for passing the microphone around and engaging in a modest amount of give and take. The big topics tonight included lots of information about goings-on in the Diocese of Haiti, which is in the midst of some pretty nasty conflict, and an extended presentation from the chair of the House of Bishops Planning Committee about the shape and character of future meetings. For one thing, it looks like they'll eventually be shorter by one day. I can give an Amen to that.

I feel like a horse who can smell the barn and has an urge to turn a trot into a gallop. One more day, and then, homeward bound.
Posted by Daniel Martins at 10:21 PM