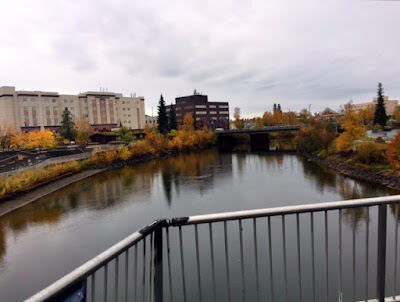 This is a view of the Chena River, the banks of which were once deemed "fair" by the explorer who first steamed up it. I snapped it while on a lunchtime pedestrian excursion with the Bishop of Tennessee. For some inexplicable reason, downtown Fairbanks is swarming with Thai restaurants. I made the mistake of cockily asking the server to make sure mine was spicy. My head hasn't stopped sweating yet. (The weather today was around 50F and drizzly. It feels like November in September.)

The morning consisted of more presentations by members of various indigenous peoples. A 96-year old tribal elder singing "I found my thrill on Blueberry Hill" in her native Athabascan language brought the house down. It was impressed upon us how much the ancient peoples of this land rely on a finely-honed eons-old pattern of relationship with nature revolving around the cycle of seasonal change. It's not only their cultural heritage; it's their food supply and their social fabric. There is great anxiety over the effect that proposed oil drilling in the Arctic National Wildlife Refuge would have on this delicate ecological balancing act.

The afternoon session was devoted mostly to preparing us for our various excursions to remote villages tomorrow, include a crash tutorial on videography and video editing on a smart phone. They're encouraging us to shoot lots of video and send clips to the communications wonks in New York, which they can harvest and edit toward the compilation of a collective video narrative.

This was the evening for "class" dinners (I'm in the Class of 2011, which is made up of all bishops who were elected in 2010, no matter whether they were consecrated that year or the following one.) As a class, we bonded extraordinarily well from the get-go, and very much enjoy one another's company.
Posted by Daniel Martins at 2:01 AM

I'll be in Fairbanks on Tuesday evening (after driving from Anchorage) for clergy meeting just before our diocesan convention. The weather you are encountering is the same here in Anchorage right now - rather depressing, honestly. Being born and raised in Alaska, I have some views on this land and its resources but I won't post them on this medium - politics on this matter is a very sensitive thing. Nevertheless, I do wonder about how eco-politics is serving the Gospel of our Lord Jesus Christ and the dire matter of lost souls, the cross of Jesus, and the hope of glory. David+

Your concern is well founded about eco-politics. In churches which are thriving, there is just too much work to do carrying out our Lord's Great Commission to worry about what is basically a secular, political issue. I fear it is one of those extraneous issues which tends to fill a void in so many organizations who have in some way become rudderless.

Anyone who knows me at all knows that I am publicly apolitical in the extreme. I was *the only* bishop in the house the other day who remained seated when everyone else got up for a photo op behind a huge banner proclaiming support for some environmental cause (anti-ANWR drilling? I forget). However, the impression I'm getting is that the eco-politics emanate from the grassroots, from those who perceive their livelihoods to be in peril, and not imposed from above by liberal activists constantly in search of a cause because they are embarrassed by the gospel.