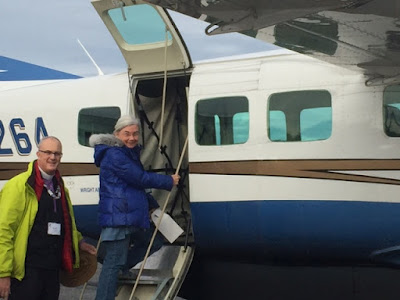 Here's the lovely Lady Brenda, along with Alaska's own Bishop Mark Lattime, boarding our principal mode of transportation today. It took us, along with the Presiding Bishop and his right-hand man Canon Michael Hunn, the Bishop of Wyoming and his wife, and the Bishop of Vermont and his wife, to the village of Fort Yukon, a little more than an hour north from Fairbanks by air (and well inside the Arctic Circle). This was but one piece of a large "apostolic progression" of bishops into several communities in the interior of Alaska. (Bishop Lattime, by the way, travels this way all the time; most of the places he visits can't be driven to.)

A word about the history of Christianity in Alaska is in order. The gospel was first brought to this part of the world by Russian Orthodox missionaries in the eighteenth century. But they tended to concentrate on the coastal areas and not pay much attention to the interior. It was other mainline churches--generally Roman Catholic, Presbyterian, and Anglican--that were hugely successful in evangelizing the native peoples of the interior in the nineteenth century. But since, in that era, churches were expected to take responsibility for hospitals and schools, the churches prudently decided not to compete with one another, and divvied up the territory. The sprawling plain known as the Yukon Flats became an Episcopalian enclave.

So visiting one of these villages is akin to visiting an English village 75 or 100 years ago. Separation of church and state is not one of their core values. We were greeted at the airstrip by the mayor, the village chief, and the parish priest. They bussed us directly to the village church, St Stephen's, which was established more than a century ago by the legendary evangelist of the Yukon, Archdeacon Hudson Stuck. We entered the building to the strains of a string band of children and youth--fiddles and guitars--leading congregational singing. It was magical.

Because this  village shares a priest with another, they can't celebrate the Eucharist as often as they'd like, so it wasn't too difficult for them to prevail on Bishop Lattime and Presiding Bishop Curry to lead a somewhat impromptu celebration--again with the fiddles and guitars and a venerable reed organ leading the way. Bishop Curry did what Bishop Curry does by way of a sermon, which means that there were no dull moments. 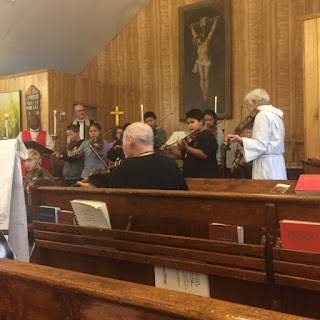 We were then whisked off to the Tribal Hall, where we were given seats of honor and feted with moose soup, local king salmon from the Yukon River, and sundry side items. It was a feast. With the chief presiding, we were addressed by the mayor, the police chief, the parish priest, and all the members of the tribal council. Two things stood out for me: their sincere and abiding faith in Christ, and the oppressive weight of alcoholism, an epidemic of teen suicide, an anxiety over the prospect of environmental change making it ever more difficult to continue with their centuries-old way of life, which is organically bound up with the cycle of seasonal change, fish spawning, and caribou migration. Then there was more music, this time accompanied by some folk dancing, which they even persuaded YFNB to participate in. (Sorry, no pictures or video.)

We then, literally, went down to the river to pray On the bank of the Yukon, we offered a brief liturgy-of-the-word with the theme of stewardship of creation and blessing of the land. Many commented that they have never seen the water level so low, which only heightens their anxiety. (At that moment it felt to me like we were visiting December in September--it was about 40F, breezy, and overcast. Fortunately, we had been warned to layer up.)

On our way back to the airstrip, we stopped twice: once to visit and offer prayers at the grave of Archdeacon Stuck, and then to bless a newly-constructed morgue building. This may seem a little odd, but burying a body in the midst of a long and frigid Yukon winter is no mean feat. The morgue, which is next to the church, is the place where the casket is constructed, and the body prepared for burial, and preserved (a natural cold storage) while the grave is dug, which is a lengthy and laborious process. 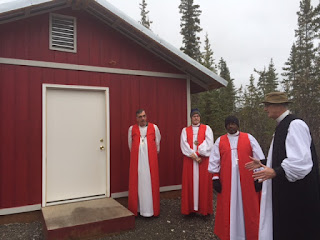 We were back on our single engine overwing aircraft around 4:00, and safely at our hotel 90 minutes later. It was rather an amazing day. Within this calendar year, I have visited Anglican Christian communities in Peru, Tanzania, and now the Arctic interior of Alaska. While there are huge differences between the three places, I find myself tracking a thread of commonalities among these "developing world" contexts. There is much to ponder.

Posted by Daniel Martins at 1:53 AM

You can share with them in addition to the Good Word, that quietly behind the scenes the views of the climate change alarmists are slowly converging with the climate change realists: the changes are going to be much smaller than has been hyped, probably benign on balance, and likely be swamped over the next 2-3 generations by natural periodic changes in climate drivers. It will take some time, perhaps never, before this state of affairs reaches the usual public sources and advocates.

I am an agnostic on the macro-climate change issues. But the reality on the ground for the Gwich'in is that they've never seen the water level of the Yukon as low as it is right now. Whatever the reason for that, it's a reality that has a substantial impact on them. The same can be said about the decreased numbers in the salmon run and changes in caribou population and migration patterns.