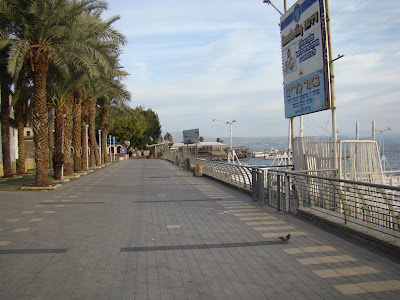 Friday, January 23. Back to a more reasonable "all aboard" call time of 8:00 AM. Today will be our longest travel day of the trip, as our ultimate destination is a resort town on the Dead Sea, well to the south of the Galilean venue where we have spent two nights. I will miss this storied lake. The night was mild enough that I could keep the balcony door in my hotel room wide open all night, and even being on the ninth floor and a full block from the beach, I was soothed by the rhythmic lapping of the water on the shore. As we leave Tiberias, I am mildly astonished to sea actual crashing surf such as one might observe on Lake Michigan on a breezy day, and more impressive than the Gulf of Mexico ever is along the Mississippi coast. 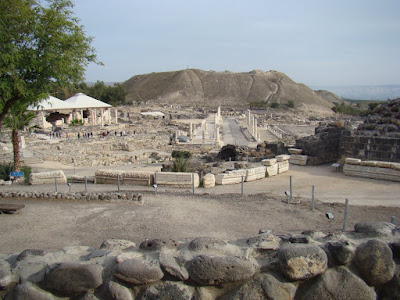 Driving south on the highway that parallels the Jordan River (only on a straighter path), we arrive thirty minutes or so later at Beit She'an, which is both a national park an a "live" archeological dig. For anyone with even the slightest interest in archeology, it is an amazing experience. At the height of its develpment as an urban center, in 8th century, an earthquake leveled the city. Excavations over the last several years have gradually uncovered that moment of destruction, frozen in time. The twelve of us were spellbound by Yossi's narrative; he had personally work on the site early in his professional career. We experienced the uncanny acoustics of the ampitheatre, inspected the public toilets, and witnessed multiple layers of pavement as the keys of the city were passed from Romans to Byzantines to Arabs to Crusaders to Turks. I came away from the entire trip with many things, but one was certainly a profound respect for the engineering prowess of ancient civilizations. 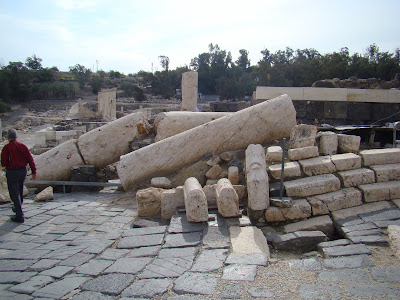 In a politically neutral world, we would have proceeded to our Dead Sea rendezvous on the same highway that had brought us from Tiberias to Beit She'an. That's the route Jesus would have walked, taking him through the Decapolis and Samaria en route to Judea. But today we'd be talking about the heart of what is still officially the "occupied West Bank," so it was deemed prudent to make a large letter C.  We backtrack a little bit north and considerably east, through the Jezreel Valley once again, and then head south at 70 mph on what is still a new toll road along what had been, before 1967, the border between Israel and Jordan. It was an unsettling juxtaposition of 21st century technology ("open road tolling" and very attractive rest areas) with ancient feuds, signified by fortified barbed wire all along the way on our left, with the periodic appearance of a 20-foot high concrete wall shielding this Israeli highway and nearby Israeli towns from potential hostile projectiles emanating from the Palestinian communities that we were whizzing by. It's a sad and complicated reality. 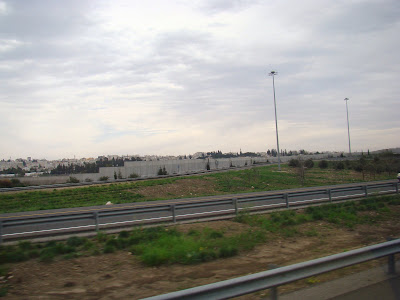 Gradually, as we head south, the appearance of the countryside begins to shift as if we were driving from, say, the San Diego County coastal area to the Coachella Valley to Palm Springs, only compressed into a much smaller area. Soon we cross the freeway that could have taken us either back to Tel Aviv to the west or Jerusalem to the east. I see exits for Ashdod and Ashkelon and realize that we're probably only 30 miles or so from Gaza, as those communities had taken Hamas rocket fire only a week or so earlier. I don't for a moment feel unsafe, but it was sobering to be in such temporal and physical proximity to a war zone. Soon we're in Beersheba (spelled several different ways--this is the one I remember from my old King James bible). This is territory associated with the proto-patriarch Abraham, and we're on the edge of the vast Negev desert that takes up nearly half of Israel's territory. 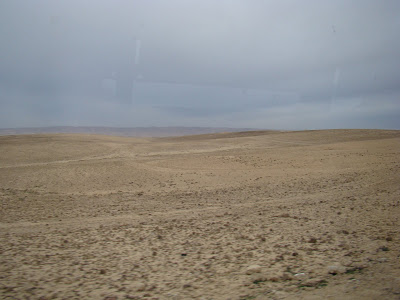 In Beersheba we turn left (east) and head into some truly desolate territory--dry and hilly. From time to time we see a small settlement consisting of a handful of ramshackle structures made mostly of corrogated metal and black plastic sheeting, with a few children kicking around a
soccer ball while some goats or sheep wander around, and maybe with a pickup truck or two on sight. Once in a while there might even be some camels. These, it turns out, are Bedouin camps, only they're not so much
"camps" anymore because the Bedouin have pretty much given up their nomadic ways because, for a number of reasons I do not completely understand, they no longer have to chase pastureland in order to survive. Now, driving past these little communities, one is tempted to infer that they live in abject poverty. Indeed, I've seen some of the infamous favelas in Brazil that look several notches more upscale. But the truth is--so we're told, at any rate--that they've essentially lived this way for millenia, only now they have a few more perks, so they actually think they've struck the Mother Lode. Everything is relative, I guess. As it turns out, we're headed for a made-for-tourists iteration of a traditional Bedouin camp. Instead of plastic sheeting, the tent material is wool woven in attractive decorative patterns, but the components of the substructure looks like they could have been purchased at Home Depot. So we plop down on some cushions while a guy in a caftan squats by a fire and cooks fresh pita bread in a large pan while we watch. Some among us are a little squeamish about the sanitation conditions, but it's nearly 2 PM and we're all pretty hungry. So when the bread arrives, along with the ubiquitous hummus and vegetables and kebab (it's turkey today, we're told, though I look around later and never see any turkeys on the premises, while there is a herd of goats off in the distance, to say nothing of a burro or two), we wolf it down. 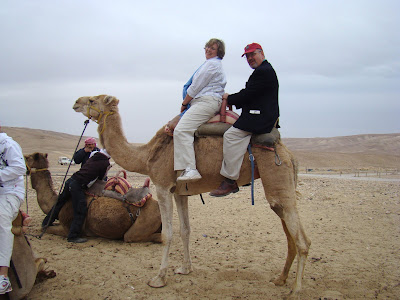 Then it's time for a camel ride. These are truly exotic beasts, and I have to say, they didn't seem entirely happy with their lot in life. I wonder whether they let out a collective moan whenever they see a tour bus pull in. "Crap! Not again!" We're told not to let our fingers get anywhere near their  mouths--that is, if we care about our fingers. To allow a rider to mount, these poor creatures have to kneel, first on the front end, then on the back. It's a slow and apparently tortuous process, and herein lies, I think, my perception of their endemic angst. And for the rider, it's akin to being on a sl0w-miving roller coaster. And for the record, camels are wider than horses. I would have been much more prepared for the experience were I a 15-year old female cheerleader at the peak of training ... if you catch my drift. 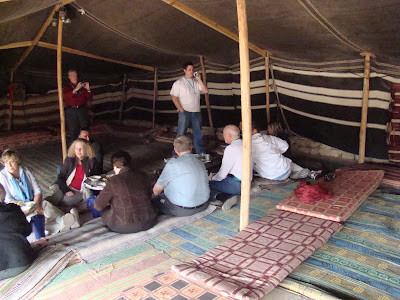 But wait ... there's more. Back onto the tent cushions for some sweet hot tea chased by some uber-strong Arab coffee, followed by a sort of lecture-recital from a Bedouin with a degree in musicology (ah, my old field!) singing and playing a plucked/strummed five double-string instrument and talking to us about Bedouin culture.
Once we were safely back on the bus, with the camels in our driver's rearview mirrow (much to the camels' satisfaction, I'm sure), we headed a few miles back in the direction from which we had come, headed for a junction in the town of Arad, a relatively new town populated largely by sephardic Jews from Ethiopia and reflecting Israel's determination to settle and subdue the desert. The community has a quite pleasant feel to it, reminding me, once again, of any number of towns in arid parts of California. 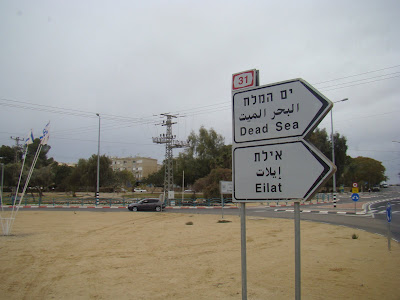 By sunset we are pulling in to the resort town of Ein Bokek (and the Hotel Daniel, I am pleased to discover), on the western shore of the Dead Sea. By this time, it is officially the Sabbath in Israel, so one of the elevators automatically stops at every floor, sparing its observant passengers the labor of pushing a button. It's such a beautiful evening that our dinner tables are set outdoors on a patio overlooking the pool, which is fed by the
saline waters of the Dead Sea itself. Yossi and his wife (who drove from Jerusalem to meet us there) and Sara and Meier (our bus driver) lead us in the traditional Jewish prayers and the ceremonial blessing of wine and bread on the evening of the Sabbath.  After dinner, as has been my custom every night, I pay for some internet time on a public computer--about $8USD for an hour--and check email and update my Facebook status. Not enought time, however, for blogging. 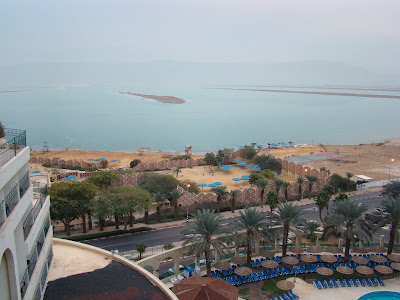 Posted by Daniel Martins at 7:57 PM

In '77,When I was rector in El Centro, -42', we had visitors that came to visit and, at that time, the Hughe's "Bananas" were still flying in from LAX. They had sjust retturned from a MId-east vacation.

When we drove them to Julian, Mission Bay and back they said, "The drive from El Centro up to the pacific range is just like Israel and the West Bank, rocks, desert and all!" I saw whet they meant.