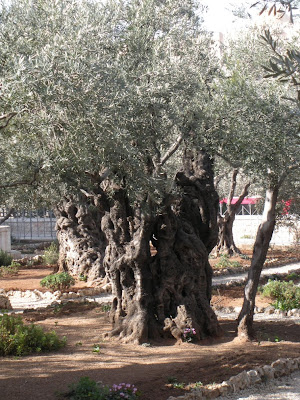 
O Root of Jesse, you stand as an ensign to the peoples, before you kings will shut their mouths, and nations bow in worship:  Come and deliver us, and tarry not.

or (from the hymn version) …


O come, thou Branch of Jesse’s tree,
free them from Satan’s tyranny
that trust thy mighty power to save,
and give them victory o’er the grave.

The first rendition is perhaps truer to the original Latin (radix=root), but the metrical paraphrase may be more symbolically accurate. Jesse, of course, is the father of proto-messiah King David, and a distant ancestor of Jesus. So Jesus can be understood as proleptically “contained” in Jesse, the one who is his “root,” and because of that “containment,” Jesse can be understood as “an ensign to the peoples” (Isaiah 11:10).
Jesus, then, in the terms of the hymn version of the antiphon, is the “branch of Jesse’s tree.” “Branch” could just as easily be rendered “shoot” or “rod.” The picture at the top of this post—snapped during my visit to the Holy Land last January--is of an olive tree in the Garden of Gethsemane, on the Mount of Olives, overlooking the east wall of Jerusalem. Olives have been cultivated there continuously for at least 3000 years, so the tree in the photo is of the same genetic stock as the ones that stood there in the time of Jesus, and, a millennium earlier, in the time of David. Look closely and you’ll see exactly what inspired Isaiah’s poetic oracle—an old and gnarled trunk (the “root”) out of which springs a younger branch heading straight up (the “shoot”).
This third of the seven antiphons definitely takes the latent sense of urgency implied in the first two and “kicks it up a notch.” The human race is in a world of hurt. Call it what you will—Satan, the power of Sin and Death, tyranny, oppression, exploitation, the White Witch of Narnia—it matters little. And we’re tired of it. We want something better, and we know something better is possible. “Come and deliver us,” we cry, “and tarry not.” The “branch and flower of Jesse’s stem” (Hymnal 1982, #307) is indeed our hope and our salvation.
Maranatha. Come, Lord Jesus.
Posted by Daniel Martins at 2:00 AM