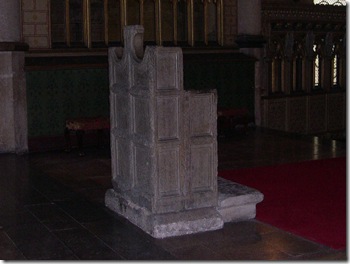 Today is the (lesser) feast of St Augustine of Canterbury. He was the Roman monk who was sent to England by Pope Gregory (“the Great”) in 597. He established a mission in the kingdom of Kent (the seat of which is now known as Canterbury), re-established contact with the indigenous Celtic church that had been living in isolation for 150 years or so, and became the first Archbishop of the new episcopal see of Canterbury. Rowan Williams, the present incumbent, is the 103rd in succession to Augustine. The chair pictured above sits near the east end of Canterbury cathedral and is known as “Augustine’s throne,” but, I’m told, actually dates only from the thirteenth century (Augustine died in 604, on May 26).

A thousand years (and more) after Augustine, as British imperialism led to colonialism, the church over which Augustine and his successors exercised pastoral oversight grew and evolved into an international family of churches that share the ecclesial ‘DNA’ known as Anglicanism. This family now exists in 39 autonomous provinces, numbering almost 80 million, and with a significant presence on every inhabited continent. It is the third largest Christian communion, behind Rome and Orthodoxy.

It is probably no secret to anyone reading this that the Anglican family is under an enormous amount of stress in recent years. There are powerful centripetal forces at work, and substantial fractures have appeared in the Anglican communion that are widening daily, in direct proportion to the recession of any plausible hope of their being healed. Canterbury itself, including the words and actions of Archbishop Williams, is at the epicenter of this conflict. Some have questioned—or even overtly rejected--the enduring value of Augustine's chair as a sign and focal point of Anglican unity.

I have generally been a supporter of Rowan Williams. He possesses a combination of frightening intelligence and manifest holiness that is the hallmark of not just a good pastor, but a great one. My admiration is not unqualified, and I am among those who are disappointed that he has not responded more quickly to articulate the “consequences” (his word) for the behavior of my own church (the Episcopal Church, of the “mostly USA” variety), which has intentionally veered away from the norms of our communion’s common life. Nonetheless, regardless of my personal opinion of the present occupant of the see, today’s commemoration reminds me of the vital importance of Canterbury as one of the “instruments of communion” for Anglican Christians.

In our creeds, we profess that the Church is “apostolic.” In our baptismal vows, we affirm fidelity to the “fellowship of the apostles.” Yes, without Canterbury, we would still have the historic episcopate (a chain of bishops-in-succession that can be transparently followed back to the original apostles) as a sign of our visible connection to the church that was “born” on the day of Pentecost. But it’s alarmingly easy to reach an abstract and mechanistic understanding of “apostolic succession” that leads to such anomalies as episcopi vagantes—in effect, bishops without churches. A healthy catholic ecclesiology certainly includes bishops in historic succession, but it also includes something more organic and more dispersed throughout the whole community of the faithful, a succession not simply of apostolic bishops, but of apostolic churches. The element of ecclesial security that a connection to Canterbury provides is simply this: the church of Canterbury is a church that is not just old, but was itself established by a church that was founded by not one, but two, apostles: Ss Peter and Paul. Canterbury is the token of the apostolicity of my particular church. Being tied to Canterbury is not magic. It guarantees nothing in and of itself. But, as part of a system of connections and reference points, it is invaluable, and ought not to be tossed aside, even for reasons that, in the thick of present but ultimately passing conflict, appear weighty.

A wonderful day to celebrate the First ABC, Augustine!

And a wonderful day having seen your name on the (long) list of candidates for Bishop of Springfield.

Know that you will be in my prayers.

Do you mean centrifugal (away from the center) forces, rather than centripetal (toward the center)?