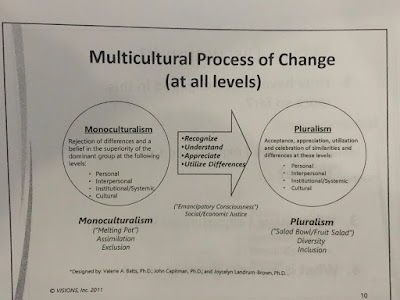 Our diversity/anti-racism training regimen continued today. After breakfast, we began at our tables with the usual brief announcements from the appointed "MC" for the day, followed by Morning Prayer led by our chaplains. Then it was back to the team from Visions, Inc. for more of what we began yesterday.

To their credit, the team realizes that, regardless of the quality of the material they present, the real work gets done as it is processed by those who are on the receiving end. So they are giving us lots of time for table discussion--more, in fact, than has ever been my experience at a meeting of the House, whatever the topic. This allows for trust to gradually develop between the bishops at a particular table, which facilitates greater candor and self-disclosure. I have been frustrated over the years at how sensitive and important subjects get very superficial treatment on these occasions. So, while I find some of the material we are being asked to engage questionable on multiple levels, and might even question whether the topic itself is the highest and best use of our time together, I am grateful that we are being given the opportunity to "go deep" with it.

Today we were invited to consider the various ways in which life is made either easier or more difficult for us by virtue of factors over which we have no control. Being white, male, heterosexual, cisgender, English-speaking, formally educated, able-bodied, and ordained, I definitely have a few advantages. The only boxes I could check on the other side of the ledger were immigrant (yes, technically I am an immigrant), and elderly (which makes me, I guess, potentially subject to age discrimination, though, so far, it's been the good kind of discrimination!).

One category not on the handouts, however, but which I summoned the requisite courage to mention at my table, is "theological conservative," which, in the context of the House of Bishops, is not merely a minority but veritably an endangered species. I brought this up with some trepidation, and mention it here with even more, because there are many who will cite all the advantages I enumerated in the preceding paragraph and scoff at the notion that I am even potentially a victim of discrimination or oppression on this score. If that happens, I simply receive and take note of the scoffing. I don't have a clever riposte.

But I was gratified by the openness of my table-mates to hear what I was saying about my experience of the last six years, and to honor the feelings about it that I shared. That in itself doesn't solve very much, but it's not nothing.

The day concluded with dinner out by "classes"--in my case, the other bishops who were elected in 2010. We enjoyed a quite pleasant German restaurant.
Posted by Daniel Martins at 9:49 PM