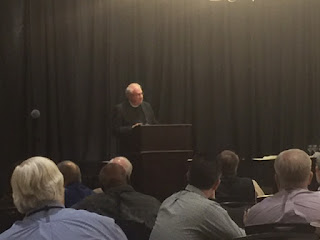 No dramatic or particularly compelling photo ops today. What you're looking at here is a fuzzy shot of the Rev. Robert Williams of the United Methodist Church, who flew all the way out from Philadelphia to advocate for the emerging full-communion agreement between the UMC and the Episcopal Church. This matter won't come before General Convention until 2021, but its proponents are doing all they can to get it on everyone's radar.

I'm of a double mind on this. I have a deep personal commitment to ecumenism. Reconciliation and unity are of the essence of the gospel. The way the proposal is being framed is that we are being asked to recognize one another as churches, and hence, one another's members and ministries. There is no assertion that we are to agree on every point of faith and practice. That said, I stumble over the Methodists' use of grape juice rather than wine in the Eucharist. That may seem like a picayunish detail, but it's not, particularly in view of the Chicago-Lambeth Quadrilateral's articulation of the use of "the elements ordained by [Christ]" when it lays out the benchmarks for Anglican ecumenical discussions.

But there's more. Liberals in TEC are queasy about the proposal because the UMC still officially holds to an orthodox understanding of sexuality and marriage. However, the only reason this is so is because the UMC includes within its ranks large numbers of Methodists in various African countries, who tend to hold traditional views. There is a big showdown scheduled for 2019, and it is anybody's guess what will happen. If the UMC remains intact as is, it will likely continue down the road of orthodoxy and therefore become unappealing to mainstream Episcopalians. If they split, opposition from the left will dissolve. The fat lady has not yet even begun to sing in all of this.

So, what else did we do today? We had a business meeting--an official session, with Roberts' Rules and all that goes with it. The most time-and-energy-consuming part of this meeting was the passage of a "word to the church" on issues of stewardship of the environment, with cognate intersections with racism and other issues of social justice. I don't have access to the "perfected" text just yet, but I'm sure it will be out in cyberspace shortly. I didn't vote against it, but I didn't vote for it either, so I guess that's an abstention. There's nothing glaringly egregious about it, but I think it's theologically weak and is riddled with imprecise language that weakens its impact. I didn't join the plenary wordsmithing discussion, mostly for reasons of keeping my powder dry for other battles. But I am concerned about a pattern of using language like "people of God" and "family of God" to seemingly refer to all people generally, rather than specifically to those who are "in Christ," the community of the baptized. This both flows from and abets sloppy thinking and sloppy biblical exegesis.

Everything else was pretty pro forma. We had the afternoon off, which I used to keep on top of the never-ending stream of emails. We gathered again for a closing banquet, and we're officially finished now. I write at mid-evening local time. Many of us are on a flight that is set to depart at 1:20am, so it's going to be a long night and a long day. Brenda and I have a substantial layover in Seattle and a just-plain-long one in Dallas. It will be bedtime Wednesday by the time we get home.
Posted by Daniel Martins at 12:57 AM

It's a pleasure to read an article.