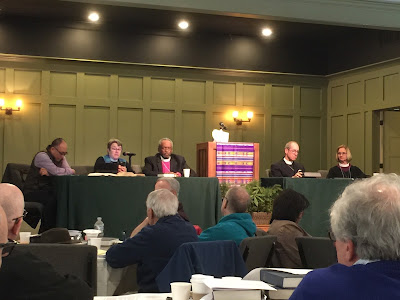 We began with another table discussion of generous length (about 30 minutes, as I recall). Each table was given a sheet amalgamating all the feedback that had been turned in on sticky notes yesterday concerning how we think we're meeting the personal and institutional challenges of dealing with the way we tend to systematically marginalize individuals and groups based on criteria over which they have no control ("Who I am" rather than "What I do").

This went well enough, and then the plenary floor was open to sharing from the table discussions. All was going according to plan. Then one bishop (whom I will not name, though he probably wouldn't mind) got up and said, in effect, "There's an elephant in the room, and we're ignoring it in favor of a bunch of navel gazing." That's when everything went off the rails. A handful of others got up and said, "Yeah. There's an elephant in the room, and we need to talk about it!" Except ... nobody actually named the elephant. And I was getting the feeling that those who were giving their Amens to the original comment were all talking about different elephants, but I didn't know for sure. Was I the only one who was clueless? So I went to the microphone myself and said, "We have a set of Core Values in this House, one of which is to speak directly. But here I am listening to a bunch of us saying that there's something we desperately need to talk about, and I have no idea what it is."

After a few more speakers, we took a break while the Presiding Bishop, the members of the Planning Committee, and the chaplains all hung heads together to figure what to do. During the break, several bishops greeted me enthusiastically and thanked me for saying what I did, because they were equally clueless. It felt good not be alone in my ignorance.

Then the bishop who had made the comment that got the whole ruckus started came up to me and clarified what he meant. It was all about the Bishop of Washington's sermon on Sunday, and her remark about the number of her own parishes that are slowly (or not so slowly) withering away, without even a spark of the sort of vitality that would be attractive to those seeking a deeper spiritual life ... and here we are spending four days talking about our feelings and our childhood memories. I was glad to hear this clarification, because I had been afraid that it had something to do with the  ongoing post-election anxiety level in the country and among many Episcopalians, and that's not a weed patch I would have been particularly happy about getting down into. (I suspect that some of the Amen-voicers were coming from such a place, however.)

In the round of plenary discussion that followed the break, I went to the mic and said something like this: "Only a handful of us in the room today, if that, were in the House 25 years ago on the occasion of that last 'blowup' in relationships. Bishops almost came to blows during General Convention, and the room had to be cleared of observers. Since then, the House has focused more on 'process' concerns, building collegiality, and less on 'content' issues. Perhaps what we've seen this morning is a sign of pent-up rebellion against dealing with topics of secondary and tertiary importance while not being given an opportunity to talk about the really urgent concerns that we have in this church. I, for one, believe there is still a great deal of truth that yet needs to be told about the events surrounding the massive departures from our church over the last 10-12 years. I know many are in quiet anguish over the issues of congregational vitality that Marianne Budde raised in her sermon. And I know as well that there are some among us who wish we could speak a word of hope into the political anxiety that has enveloped our society. So perhaps this moment is a test. Perhaps it is a test of whether 25 years of focusing on process concerns and relationship building has actually made us more mature in Christ, whether it has equipped us to once again engage difficult subjects with clarity and candor but still be faithful to our vows to 'respect the dignity of every human being.'"

We broke for lunch at noon, but were seriously off our agenda. When we got back together at 1:30, the head of the Planning Committee reported on the deliberations of the group. This did not include a detailed plan, but, rather, a strong assurance that everything that had been said would be taken into consideration as future meetings are structured. But ... wow, I'm not sure anybody saw this coming.

We then plowed through a list of things that we were supposed to have been dealt with in the morning:


We took another break, and the reconvened in an official business session (hence the photo above of the officers of the House looking more formal than they usually do), with proper parliamentary procedure. It was mostly pretty humdrum stuff on the order of approving a spate of upcoming retirements and resignations. But the skunk at the garden party was a report from the Task Force on Episcopacy, created by a 2015 General Convention resolution. Their broad mandate is to consider the ways that bishops are selected, formed, and deployed. To everoyne's relief, they have already concluded that bishops should continue to be elected rather than appointed, and that the various dioceses should still be responsible for the electing process. Whew! But they are also considering, among other things, the creaton of a pool of candidates who have already discerned a potential call to episcopal ministry, and are pre-screened, with background check results at the ready. Dioceses looking for a bishop would be encouraged to fish in such a pond. It would all be optional of course, but I can certainly foresee tremendous informal pressure put on dioceses to do just that, with failure to do so coming at the potential cost of difficulties in the consent process for whomever is elected. The driving concern, of course, is for greater diversity of gender and ethnicity among the members of the House of Bishops--a laudable goal, perhaps, but it should be allowed to develop organically. This development is scary, and it should be nipped ferociously in the bud.

As per custom, our final dinner was a bit upscale, with many of the bishops dressing up. Bow ties were particularly in fashion tonight. Me ...  I just swapped out my hooded sweatshirt for a corduroy sport coat. I'm on the 0530 airport shuttle in the morning. This HOB is in the books now.
Posted by Daniel Martins at 8:44 PM

Am interested in the Task Force Report. Our diocese elected Heather Cook, and still don't know what happened. Our assisting bishop described the Task Force during her episcopal visit to the parish. But "diversity" will certainly focus on gender and race -- not on theology. Any pool of episcopal candidates will be overwhelmingly liberal, and they will also be "climbers." I have known more than my share of episcopal clergy in my 50+ years in the outfit, and they seem to fit into 2 categories: those on the climb, who are politicking and moving up, and those who are natural pastors and pleased to remain parish clergy, who see episcopal office as a burden and a chore, and would never submit their name to an episcopal search function. I much prefer the second group.

I agree that there should be a pool of people who are interested in the episcopate. Only anyone who submits their name to it should be permanently barred from election as a bishop.

Thanks Dan for your honesty and I hope for "real" meetings in the future. I like the "good old days" when people spoke to each other (even with heat) than all this processing (like bologna and american cheese). And Go Cubs!

Nice article, thanks for the information. You give me some idea's. I will bookmark for next reference.

On the procedural report, thanks. On the merits, pathetic.