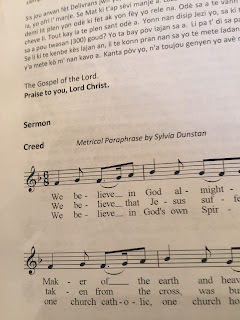 Mercifully, in view of losing an hour of the night to a time change, the first scheduled activity, other than breakfast, was the 10am celebration of the Eucharist for the Fifth Sunday in Lent. The Bishop of Northern Michigan presided and the Bishop of Northwest Texas preached. (The memorable takeaway line from his homily: "Do you have what it takes to lose?") The liturgy was BCPish, to some extent (Eucharistic Prayer C, with predictable addenda--Why, when we find this prayer is too patriarchal, do we think we're improving it by adding Rachel and Leah, but render the other two women who bore children to Jacob invisible by keeping them anonymous?). The real eyebrow-raiser was this putative metrical version of the Nicene Creed (sung to Hyfyrdol in a cut-time meter):


We believe in God almighty, Author of all things that be,Maker of the earth and heavens, Keeper of the sky and sea.We believe in God’s Son, Jesus, now for us both Lord and Christ,of the Spirit and of Mary born to bring abundant life.

We believe that Jesus suffered, scourged and scorned and crucified;taken from the cross, was buried—true Life there had truly died.We believe that on the third day Christ was raised up from the grave,
then ascended to God’s right hand. He will come to judge and save.

We believe in God’s own Spirit, bonding all the saints within
one church, catholic and holy, where forgiveness frees from sin;
in the body’s resurrection, for the breaking of death’s chain
gives the life that’s everlasting. This the faith that I have claimed.then ascended to God’s right hand. He will come to judge and save.

We believe in God’s own Spirit, bonding all the saints withinone church, catholic and holy, where forgiveness frees from sin;in the body’s resurrection, for the breaking of death’s chaingives the life that’s everlasting. This the faith that we have claimed.

There is probably not anything objectionable in what this text includes. The problems lie in what it does not include. With the Nicene Creed, linguistic precision is of the essence of the text; that is its inherent nature. Every word is important. This may be a perfectly fine hymn. It just isn't the Nicene Creed. It really isn't even a paraphrase of the Nicene Creed.

The rest of the day, honoring the Sabbath principle, was lightly-scheduled. The afternoon was free. I 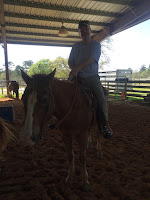 signed up, along with eight other bishops and two members of the Presiding Bishop's staff, for a horseback ride. I've done this two or three times before at Camp Allen and always enjoyed it. It lasted about 45 minutes. It was a beautiful day and I'm really glad I did it.

After dinner, we adjourned to our meeting room underneath the chapel for a regular HOB event called a Fireside Chat. (To evoke atmosphere, images of a fireplace were fed by LCD projectors onto two screens.) The Fireside Chat is effectively an executive session, so there's not much I can say. There was some news shared with us of both a pastoral and administrative nature, and both will be made public in due course--fairly soon, I would suspect. We talked a bit about the recent Primates' Meeting and the upcoming ACC meeting. A couple of other items were raised by bishops from the floor--again, stuff that is likely to become public fairly quickly.

It's the Presiding Bishop's birthday, so we feted him properly back up in the dining area. 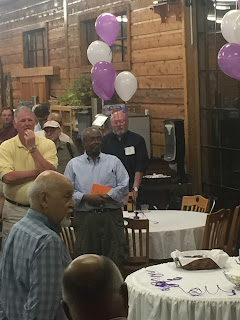 Yeah, no mention of the virgin birth in that "creed."

Bishop Martins, you have more patience than I would have. The Creed is not paraphrased. Period. People who can't say the creed straight are heretics. Period.

And why, in common worship, do we not by default use Common Prayer?

FWIW, the text of this "putative metrical version" can also be found on the website of Trinity Cathedral Cleveland as part of their summer 2015 liturgy, BUT, it is labeled NOT as the Nicene Creed, which it follows in the order of service, but as "An Affirmation of Faith." See: http://trinitycleveland.org/wp-content/uploads/2015/09/BulletinSummer2015revised09062015.pdf No attribution or source is indicated.

Ed, this was based on the Apostles Creed and written by the late Sylvia Dunstan. The complete lyrics are found at
http://globalworship.tumblr.com/post/58459252080/i-believe-in-god-almighty-creedal-hymn-by