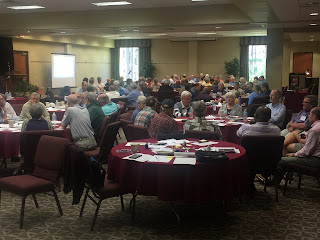 There was a 9am Eucharist and 5pm "Evening Devotions," but, for reasons already discussed, I did not attend, so there isn't anything I can say about them. I did offer straight-Prayer Book MP and EP from the comfort of my room.

There were plenary working sessions from 10:30 until noon, and from 2:00 until 4:30. The planners, chief of whom I suspect was the Presiding Bishop himself, were endeavoring to elicit a range of thoughts and feelings from the body, and do so with uncommon efficiency, that would allow them to identify themes and priorities that will drive planning for all HOB gathering for the remainder of the triennium (that is, until the General Convention in 2018). The process was led by Bishops Todd Ousley of Eastern Michigan and Mary Gray-Reeves of El Camino Real. It was quite structured and disciplined, which served the end of efficiency. We were asked to ponder the Summary of the Law and connect with what in means for us in TEC in general and the HOB in particular. We were asked to list adjectives that would describe our ideal House of Bishops meeting. We did these and other exercises first as individuals, then in our table groups, then in groups of two joined tables, with result delivered to the podium, soon thereafter appearing on screens arranged by one of these applications that quickly illustrate what words occur most frequently by making them appear larger in proportion to their frequency.

I won't attempt to give an exhaustive summary (poke around the internet and you can probably find one), but my own subjective read is that there is notable energy and hope around themes of spiritual revival and prayer and generally serious Christian discipleship at all levels. This is encouraging, all the more so because it is out of character for recent gatherings of the House. I cannot but like the trajectory. The proof of the pudding, of course, is in the eating. But it's a good start. Whatever else one might say, the great majority of the bishops (virtually without exception, I might even say) are well-intentioned and charitably-disposed Christian leaders. That may not be everything, but it's not nothing. I am grateful.

Various special interest groups met in designated locations for lunch, which meant that I was with the Communion Partners. Between active and retired bishops, there were nearly 20 in the room, more than we've ever had at an equivalent gathering, including a good representation from the Province IX Spanish-speaking dioceses. There are many ways in which we are uniquely-positioned to be of service to this church, in addition to "having the backs" of those in our own dioceses and others who want to be faithful to the Episcopal Church while also remaining faithful to the theological and moral teaching that the formularies of that church still stand for.
Posted by Daniel Martins at 9:33 PM