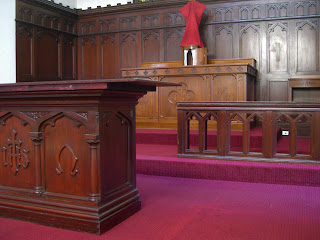 The morning's accumulation of eMails and listserv posts brought with it news of the passing from this life, at the age of 92, of the Revd Dr Reginald Fuller, eminent New Testament scholar and longtime professor at Virginia Theological Seminary. If anyone was ever "a gentleman and a scholar," it was Dr Fuller. During my first year in seminary (86-87), he was visiting professor at Nashotah House (adapting admirably to a rather different liturgical ethos than VTS!). His book Preaching the Lectionary (ironically, commissioned by a Roman Catholic publisher and hence conforming to their lectionary) has been a mainstay of my preaching preparation for two decades.

It was Dr Fuller, in his notes for the Good Friday passion gospel (St John), who apprised me of the Latin rendering of our Lord's word from the cross that appears in English as "It is finished"--consummatum est. There's something striking about the Latin, because it can't be mistaken for mere relief that the ordeal is over. It connotes something more like "Done deal." It speaks of an accomplishment, a bargain that has been kept, a business transaction that has been concluded, escrow closed.

But it's a mysterious transaction, a bargain the terms of which cannot be precisely contained by human language. Somehow it makes atonement, bridging the gap between God's holiness and human sinfulness.

Five days ago I commented on a radio address by Dean Jeffrey John, in which he expresses his uneasiness with a particular theory of how that atonement happens--a theory which is brimming with scriptural imagery and which has attained the status of standard dogma in some communities influenced by the theology of the Reformation. I am not comfortable with the apparently cavalier manner in which he dismisses the penal-substitutionary theory of the atonement. It has been believed by too many Christians for too long, and drinks too deeply from the well of biblical vocabulary, to just be tossed aside. But it has been pointed out to me that he was not preaching a sermon for convinced Christians; he was speaking on a radio station with a demographic of those who are already inclined to be skeptical toward Christianity. In a sense, he was engaging in apologetics, so I am personally willing to cut him some slack on this, even as we all cut St Paul some slack for appearing to embrace polytheism in his speech to the Athenians at the Areopagus (Acts 17:22-34).

More to the point, however, I do agree with Dr John insofar as it seems helpful to expand the universe of explanations for how it is that we are saved by what Christ accomplished on the cross. One worthy candidate comes from none other than the Bishop of Rome--before he bore that title and was known more modestly as Cardinal Josef Ratzinger. There are lots of other options as well. What strikes me as most important to bear in mind on this Good Friday comes from John "Amazing Grace" Newton: "I am a great sinner, and Christ is a great savior."

On now to the proper liturgy of the day--which, in highly secularized California, must take place in the evening in order for people to be able to attend, though it would ideally happen in the afternoon. The picture at the top of this post shows the staged desolation of the principal set for tonight's drama, having been prepared at the conclusion of last night's observances. I say "staged" because a post-Easter church can only partially evade the reality that the cross is a sign of victory, an emblem of triumph. As my favorite medieval poet, Venatius Honorius Fortunatus, puts it: "The royal banners forward go, the cross shines forth in mystic glow" (Hymnal 1982, #162).

This inability to ignore the "mystic glow" of the cross is amplified in my parish church, where it is not expedient to have the Altar of Repose in a completely separate space. We use a side chapel altar, but it's easily visible from almost any place in the church, creating a sort of bi-polar magnetic pull for anyone entering from the main doors (see picture below). Now in my thirteenth Triduum in this place, it's finally percolating to my conscious awareness why I have this uneasy feeling in the church every Good Friday. My spirit can't decide whether to focus on the stripped and sparse main altar or the lit and glowing Altar of Repose visible with only a 45-degree turn of the head. Both offer needful reminders of wholesome verities. Ah, I guess I'm back to the need to maintain the tension between the poles and not relax the line, losing both ends in the process. 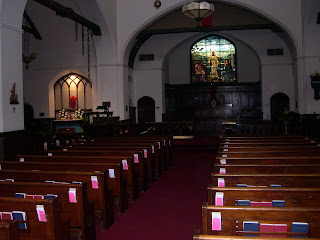 Posted by Daniel Martins at 6:36 PM

In Brazil they seem to have taken the "good" of good friday to a strange extreme, as it is a holiday where people get together, eat fish, and to various degrees, party. The solemenity of the day with which I was accustomed was not widely observed, in my view. Perhaps one could point to the "lazy" catholicism of both Brazilians and their colonizers for this apparent forgetting of what it represents.
-Jordan