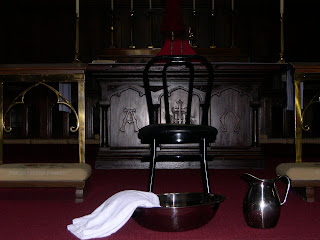 In church, no less. In front of God and everybody.

It's supposed to be twelve sets, to be specific--in token of the twelve pairs that Jesus washed in the upper room--but it hardly ever works out quite that way. Somebody forgets to come, or chickens out, or never responds to the invitation to begin with. That's OK. Jesus didn't hang on to all twelve of his either.

The name of the day--Maundy Thursday--comes from the Latin mandatum, which comes from the words of Jesus in John's Gospel: "A new commandment I give to you, that you love one another, even as I have loved you." He washes their feet as an illustration of how this love is to be put into action.

Feet are odd things. They are not the most private parts of our bodies, but neither are they the most public. Unless we're on a beach, they're usually covered in public. So it's not astonishing that there are those who are reluctant (or flat out refuse) to let the clergy wash their feet on Maundy Thursday.

For me, and for the Associate Rector, and for the deacon who will be assisting us tonight, to kneel and tend to the feet of people when we are accustomed to looking at their faces will have an edge of awkwardness. I can't say it's actually humiliating--the action doesn't have the same immediate sign value it did for Palestinian Jews in the first century--but it is certainly symbolically humbling.

And I know it's usually uncomfortable for those who are having their feet washed. It's an experience of heightened vulnerability. Will the water be too hot or too cold? Will it tickle? What will the priest think of the way they clip their toenails? They probably all take great pains beforehand to be sure that their feet don't actually need to be washed!

And for those who are sitting in the congregation, watching it all take place and listening to the choir sing Maurice Durufle's ethereal setting of Ubi caritas et amor, it's also a humbling experience. They got left out. They're not where the action is. Why, the Rector has washed her feet at least twice since he's asked me!

So there's enough humility to go around. If only we could bottle it and save it for the rest of the year for times when it is badly needed!
Posted by Daniel Martins at 6:53 PM

I had the great honor of being in the place of a disciple in this service, it was so very moving for me. I am grateful for the chance to serve God and His people. Fr. Martins, Fr. Gubuan, the Deacons, and the congregation of this church have welcomed me, as I am, and make me feel like a part of this family, my chosen family. All glory is His!