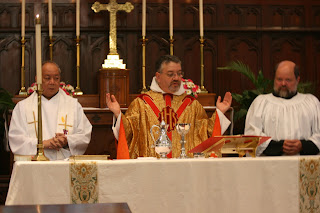 Today, as I write, is the Feast of the Ascension. In the calendar of the (1979) Book of Common Prayer, it is one of only seven occasions styled Principal Feasts. Three of the remaining six (Easter, Pentecost, Trinity) always fall on a Sunday. The other three (Christmas, Epiphany, All Saints) occasionally fall on a Sunday--or are so popular that it doesn't matter what day they fall on (Christmas), or may be observed on the Sunday following (All Saints). Epiphany, then, often gets neglected in actual parish practice.

But it is Ascension that, by definition, never falls on a Sunday. Why? Because it is, according to scriptural witness marinated in tradition, anchored to a position 40 days after Easter. Hence, it is always on a Thursday. I note that, for our Roman cousins, the day is of lesser rank than it is for Episcopalians--no longer a holy day of obligation. They have apparently surrendered to the pragmatic pastoral reality that people are simply not going to turn out in great numbers for a midweek liturgy when spring is in full bloom and thoughts are on graduation and summer and other such things.

I dare say that the great majority of Episcopal parishes in practice acknowledge that same reality and ignore the day's status in their own Prayer Book. But, idealist that I am, I'm willing to rattle a few cages to make sure the feast is duly celebrated. Tonight we had a Solemn Sung Mass with all the usual accouterments. There were about half the number of people there as would be considered "pretty good" for the principal liturgy on a Sunday. Yet, we managed to do it well, and those who did come were blessed in doing so. I was very grateful that we were able to do what we did.

I'm a big fan of liturgical "action shots" when I see them on websites and blogs. An obtrusive photographer, of course, is often not a price worth paying. These, I assure you, were taken so unobtrusively that I didn't even notice it at the time. For anyone who's curious: That gold chasuble is a exquisite work of art. It's several decades old, and we only haul it out for the seven biggies. 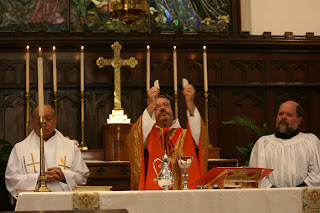 Posted by Daniel Martins at 2:00 AM

The local parishes don't do anything for Ascension Day so for the last several years I've had an Ascension Day party at my house. Not quite as high and holy as yours but better than nothing.