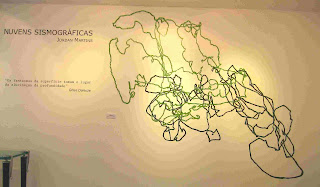 My son and his wife are presently living in Salvador, the old colonial capital and third-largest city in Brazil (3 million+), though it's non-existent on the mental maps of most non-Brazilians. He is a graduate student in studio art at the Federal University of Bahia (UFBA), where he is on track to receive the Master of Fine Arts (MFA) degree (or whatever the Brazilian equivalent is called) at the end of this calendar year. Tangentially en route to that milestone, he has a show that he hung about a week ago and is running for about another week at a gallery in that city. This picture (click to enlarge) is one of the main pieces. I'll let Jordan describe it for you in his own words:

A brief introduction to the show: it's called "Nuvens Sismograficas", which sounds really stupid in english (seismographic clouds), but I like it in Portuguese. The seismology reference comes from a set of drawings I did starting when we first got here, all done in the car or, mostly, on the bus. They're small, and were made with Ouji board type principles: the drawing would emerge as a result of the contact between the pen and paper, registering the vibrations and movements of the bus, but also contingent on the tension in my hand--"calibrated" so to speak, so that the lines wouldn't simply run off the page over and over again, thus creating a more complex image--my posture, the mood of the driver, etc. I did about 250, and in this show I hung about 90 of them. I also xeroxed them, blew them up, and transferred them in a number of ways in other works: a set of larger drawings with superimposed elements (fingerprints, bureaucratic stamps, geometric figures), collages (seven vertical panels forming a long, horizontal composition, made of map fragments), and also drawings projected on the wall (see above, two superimposed bus drawings).

I consider it a show of studies really, as the pieces were done in preparation for my final show this fall. The larger drawings especially were done to play around with different auxilliary elements that are coming into play in the collages.

More generally, it's a study of line and surface. In the paintings that I did after Sewanee, lines were becoming more important as a way to fuse together different collaged fragments, by overlapping, etc. The bus drawings were a good way for me to absorb a different quality of line and expand a fluency with them so that they could be re-employed later in larger works. I'm really pleased with the whole set of them together, showing different types or species that repeat in the whole distribution of them. I was also happy with how they looked painted on the wall, and I hope to do more with that later.

The quote on the wall is from Deleuze (The Logic of Sense): "The phantasms of the surface have replaced the halucination of depth."

Here's a view of a portion of the show where you can see several of the smaller drawings made as he described: 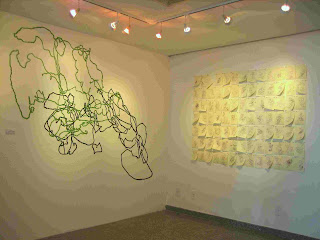 I'm not going to engage him at the level of art theory, about which I know not even enough to be harmful, but as a one-time graduate student myself in music theory, I can observe a couple of broad musical parallels with Jordan's artistic vision. There's a certain dialectic going on here. (OK, I'm not really a philosopher either, and Jordan is, but there was a Hegelian hue to my own master's thesis, which was The Unaccompanied Latin Mass in the Twentieth Century: A Dialectical Study, U.C.S.B. 1975). The dimension of randomness in the technique he used for these drawings is akin to the experimental genre of composition known as aleatoric--the heyday of which was around the middle of the last century and was typified by the works of composer John Cage, who was fond of incorporating the ambient sounds of the performance environment into the music itself.

But there is also a strictly-disciplined dimension in Jordan's drawings, which he names as "calibration"--i.e. he never let the pencil wander off the paper, and he exercised the freedom (whether consciously or not) to relax or tighten his grip. Just about anything was allowed to happen within the corral, but there was a definite fence that could not be breached. In this, there are parallels with particularly heady approaches to musical composition associated with the Burgundian school of the 15th century, wherein a the creative impulse was strictly channeled by a pre-existing melody (cantus prius factus) and/or rhythmic figure (the genre known as the isorhythmic motet). Of course, a century or so ago, Arnold Schonberg (many thanks to anyone who can tell me how to make an umlaut in this blogger software) took this idea and ran with it with all of his twelve-tone row compositions, the epitome of the principle of objectivity governing creativity.

Now...I've just written about things I've barely even thought about for 32 years. How 'bout that? Maybe I could have been a musical scholar.

Oh...Jordan will be looking for a nice tenure-track college teaching position for the fall of 2008. So spread the word!
Posted by Daniel Martins at 1:50 AM

Interesting post/artwork! Re: Umlaute, instead of hassling with Blogger’s settings, try changing your keyboard configuration to “German” (I toggle mine from English to German and back with Alt-Shift). The Umlaut-keys are then on your right hand little finger:

Dan,
Another acceptable way to accomplish the same without toggling is to type an "e" after the vowel otherwise published with an Umlaut.
Thus, Schoenberg.

Also, my bachelor's is awarded in Music Composition. Any piece of music performed is seismic, and along with a score....voila! seismographic! Too simple?

I did a lot of my degree compositions based on the practical application of the relationship of musicians one to another during performance, with the score facilitating that interaction. If there were any tremors going on it was between the performers attempting to read my notation and perform it properly. But that was the point.
BTW, one of my most favorite composers between the Schoenberg to Cage period was Barber. His music resonates within me.

Ah, yes, Barber. I appreciate him more and more. The Violin Concerto is especially luminous. But the 20th C. composer I am *really* falling more in love with every day is Ralph Vaughan Williams. Two of his symphonies are currently in the CD-changer in my car, along with "Dona Nobis Pacem" and the "Mass in G-minor." A blog on RVW is coming soon, I'm sure!