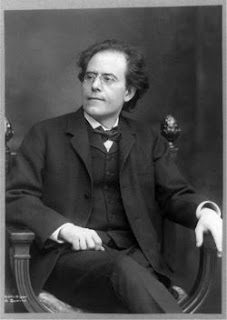 With an undergraduate music major and a Master's degree in music history, I guess you could say I'm a music lover. But, for the same reasons, you could also say that I have fairly refined tastes, and I'm not easily impressed. Generally, my attitude is that "I've heard it all." So, to find myself falling in love with a piece of music that I've known for more than 30 years (having purchased an LP edition in 1976) is a bit of a surprise. But falling in love I am--with Gustav Mahler's Second Symphony ("Resurrection"), completed in 1894, when the composer was 34 years old. It's in the CD changer in my car, and I listen to a few minutes of it every chance I get. (What an odd way to listen to music, yet I find it strangely satisfying). And I keep playing it over and over again, which I am so not prone to do.

It is a massive work--about as long as an average feature film--employing a large chorus, two vocal soloists, and a huge orchestra, including an organ. Generally, the fruit of overripe Romanticism is not much to my liking, but this work has wormed its way into my heart. The thematic material is strong, and stands up under the pressure of extended repetition and development. The quiet sections are endearing--I'm especially fond of the principal theme in the second movement--and the climaxes are...everything a climax should be. Mahler is a master of orchestration; it shows that he was familiar with the operas of Wagner, having conducted them several times from his early twenties on.

I've been particularly intrigued by the text of of the poems he uses in the fourth movement (of five)--lines from the eighteenth century German poet Friedrich Gottlieb Klopstock. Here's the whole thing, first in German, then in a very literal (i.e. non-poetic) English translation:

Primeval Light
O red rosebud!
Man lies in deepest need!
Man lies in deepest pain!
Oh how I would rather be in heaven.
There, I came upon a broad path;
There, came a little angel and wanted to send me away.
Ah no! I would not let myself be sent away!
I am from God and will return to God!
The loving God will give me a little light,
Which will light me into that eternal blissful life!

Yeah, it's a little melodramatic and syrupy (at least in translation), but I'm drawn to the line "I am from God and will return to God!" It is reminiscent in form of the words of the Ash Wednesday liturgy: "Remember that you are dust, and to dust you shall return." On the surface, these are contradictory assertions, but on the level of what might be called "poetic theology," I believe they can both be affirmed.

In particular, this sentiment reminds me of one of the hallmarks of the Anglican spiritual tradition, which is that ethics flow out of ascesis. And the fountain of ascesis is the transit of the soul from the God who creates it back to the God who redeems it--exitus et reditus in Latin. The moral life serves the ends of the spiritual life. In the confessional, a priest's overriding concern is for the spiritual welfare of the penitent. Yes, matters of law and infraction must be dealt with, but never for their own sake, but always configured toward the sanctification of the one making the confession. Talk of dust is appropriate for Ash Wednesday, but in confession and pastoral care, the Prime Directive is "Remember that you are from God, and to God you shall return!"

Mahler was a non-practicing Jew who got himself baptized in order to advance his career in a culture where anti-Semitism was only a half-century away from reaching its ugly zenith. Neither the Klopstock text nor the one he uses in the massive choral fifth movement are overtly Christian, though they are certainly not inconsistent with the paschal mystery, and a Christian may read the gospel back into them without doing them any violence, and thereby celebrate the peculiar resurrection hope that is the inheritance of those who are, per St Paul, "in Christ." 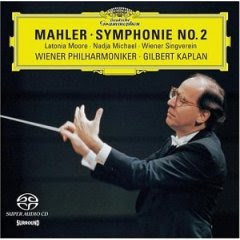 So now I'm bathing in Mahler for a while. This will pass (and I'll be back to Vaughan Williams). And I hope that I will yet have the joy of falling in love with another piece of music for the first time. There's nothing like the first time! I recall meeting the symphonies of Beethoven and Brahms while in college, Mozart's Requiem when the film Amadeus came out in the '80s, and, more recently, the magisterial Passacaglia and Fugue in C-Minor of Bach, not to mention a large number of...what shall we say?..."one night stands"? At any rate, the recording of the Mahler second that I'm listening to is the one under the baton of Gilbert Kaplan, the amateur (a very rich amateur) who bought his way into conducting the piece and has literally made a life out of it. He probably knows it inside and out better than anyone else alive. At this moment, I envy him.
Posted by Daniel Martins at 7:41 PM

I think your English translation is a bit off in one place. "Will" in German is the the 1st person singular of "wollen" which mean "to want" rather then the future of "to be" as it is in English. So I think it should be, "I come from the Father and "want to" return to him."

Makes it even better, in my mind.

RFSJ, I am not qualified to dispute your linguistic point. I did have to demonstrate proficiency in a reading knowledge of German at one time (which I did by translating an article I needed for my thesis anyway--how's that for synergizing!?). But the translation in my post is not my own; I got it from the Wikipedia entry on Mahler's 2nd Symphony. Miz Minka, are you out there?

OK. My own German was long enough ago that it's possible I have forgotten any variant translations of the word in question.

BTW, my sponsoring Diocese was Indianapolis (I'm now canonically resident in Newark) and so may I offer an early welcome to the State of Indiana! Blessings on your new ministry in the Diocese of N. Indiana.

I am with you re. Mahler. I am a retired professional horn blower so loving Mahler is in the genes. Though Jewish, Mahler under stood faith in much broader terms, much like Ghandi. It is not surprising that he named his symphony Resurrection.

Father Dan, rfsj is correct, it should be "...and want to return to God." Wikipedia is not infallible.

Here's to falling in love with brilliant pieces of music -- and I hope you get to conduct a favorite symphony one day. :) (Is there a symphony in Warsaw, IN??? If not, maybe you should stay put! Just kidding, of course...)