Both the Daily Office lectionary--via Ezekiel--and the Eucharistic lectionary--via Revelation--have of late put me in mind of the phantasm of creatures that are part human and part beast (using "beast" in the slightly archaic English sense of "non-human animal"). It is apparently a prospect (or is it a retrospect?) that lies buried deep in our collective unconscious. The faun is a compelling figure in mythology, one which Lewis creatively adopted and adapted and named Mr Tumnus in the first book of the Narnia series. Mr Tumnus is very much a "good guy" in the story. The recent film Pan's Labyrinth offers a rather more ambiguous representation of a faun. 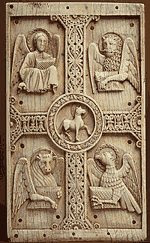 It also shows up rather prominently in the symbolic vocabulary of the Christian tradition, with the "four living creatures" of Ezekiel and Revelation identified with the four Evangelists: the eagle with John, the ox with Luke, the lion with Mark, and--drum roll please--the half-beast/half-man with Matthew.

As a Christian who is not uncomfortable with the theory of evolution as an account of how God brought human life into being, I could speculate that we retain some corporate memory of our kinship with other sentient beings, and that this sense of connection explains our fascination with the idea of an animal-human hybrid. But were I to so speculate, I would be exceeding the level of my competence in just about any relevant area.

But suddenly it's not just a matter of idle speculation. A few days ago, I ran across this article, which bears the news that the government of the U.K. is poised to approve legislation that would permit the creation of hybrid embryos (dubbed "chimeras") for purposes of research in the treatment of an array of diseases. The proposed rules would mandate the destruction of such embryos after 14 days and absolutely prohibit implantation in any womb, human or animal.

Of course, this news raises a staggering number of ethical considerations, many more than I have either the energy or the intellectual horsepower (oops! perhaps not the best metaphor in this case!) to dissect at this time. Look at the comments on the cited article for a taste of some of these. But, amid the avalanche of seemingly more pressing concerns, both secular and sacred, it is worth making a mental note that this matter has shown up on the agenda.

Martins' Law #1: If something can be done, it will be done. (Regardless of whether is should be done.) Resistance is futile.
Posted by Daniel Martins at 12:21 PM

My father was a Brownie, Sir;
My mother was a Fairy.
The notion had occurred to her,
That children would be happier,
If they were taught to vary.